The Kingdom of the Caribbean as of the 26th March was officially made a country for the people of it to have their say on how it is run. The country is part of the British Empire (it is a mandate of England) lead by King John Breasly as its head of state who also has the power to elect a government, dissolve parliament and add and fire a Minister of State. Note: This is about the Caribbean as a country, not a self-governing state.

The Caribbean as long as it has stood has always faced leadership problems, The EITC have claimed to have full ownership of the Caribbean for a long time until key officials from England reminded them that it was indeed the British Empire and the Royal Navy on which controlled its waters from harm. Another key problems that the Caribbean has faced is that Piracy and terror has appeared on the seas causing havoc to settlements. The major effecting organizations are the Pirates, EITC/Navy, Jolly Roger, Spain and France, all of which have fought so that they can win over certain parts of it.

The Caribbean is officially owned by the King of Great Britain & Ireland John Breasly. However the Caribbean does have a local government which now manages the people's part of the government, the Official Caribbean Government. 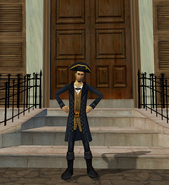 Port Royal is one of the most important locations in the Caribbean, the port's purpose is to be the HQ for trade to neighbouring ally islands as well as to hold a Navy fort. The fort is surrounded by a town on which many loyal key figures live so that the fort benefits them with providing safety against attacks from afar.

Cuba is one of the main islands. On the server Cortevos it is owned by Bill Plunderbones and is where the Gen of Peace Factory of Daggerpaine Industries is located along with the Observatory and the airfield and shipping industry.

Tortuga is a port in the Caribbean which is used by Pirates for their everyday life. Many famous battles have happened here between EITC and the Pirates however the bravery of the Pirate inhabitants has never failed and has forced the EITC again and again to withdraw all forces. A document of peace on Tortuga is in thought to the Government so that Pirates will have the right to look after their own location and to stop the constant shelling of the city by the EITC which happens daily.

The Port of Tortuga which has suffered major damage

Cuba which tends to be a peaceful island

Port Royal known as the "Second capital" next to Kingshead

The name's of the Caribbean sea seem to have changed to more modern names, some names such as the Macmorgan Pass and Prime Minister Usman's waters change depending on who is currently in charge of organizations and country

The government of the Caribbean was intended to be lead by the Prime Minister on the behalf of HM John Breasly, however due to disagreements with the Opposition Captain Shadow Sail and his Official Caribbean Government, John Breasly was forced to make Shadow Sail head of local affairs. Usman, the Prime Minister still leads the Government its only ruling party the Imperial Party on which he is leader of. Rumours have spread that the Kingdom is thinking of sacking Shadow Sail and setting up their own government, no comments have yet been released.

Below is everything you need to know:

Below are the people we need:

The Cresent Pallace is the official parliament building for the Caribbean. As well as being the governing building it is used as the HQ for the EITC & Navy.

Our national anthem is from the Hohenfriedberger Marsh which was used by Prussia (Germany).

The Flag of Voice

Our flag represents many things, red is for the bloodshed which has accrued in the past, white is for the voice for the public, the black is a reminder from the past while the crescent moon looks over us always as we progress into the future.

Our officers of the Royal Navy, EITC and security forces normally wear the same clothing.

Commodore
Add a photo to this gallery

Due to uprisings and revolts the Caribbean has a large amount of security forces at its disposal at any time. Most of the uprisings end in bloodshed as the Caribbean Imperial Party leaders normally have a crackdown upon protesters by shooting them with Cannons, grenades and bullets alike.

Security forces appearing to be shooting down pirates in Padres

A group of Security forces shooting

Uniforms of the Security forces
Add a photo to this gallery
Retrieved from "https://gamersfanon.fandom.com/wiki/Kingdom_of_the_Caribbean?oldid=716527"
Community content is available under CC-BY-SA unless otherwise noted.