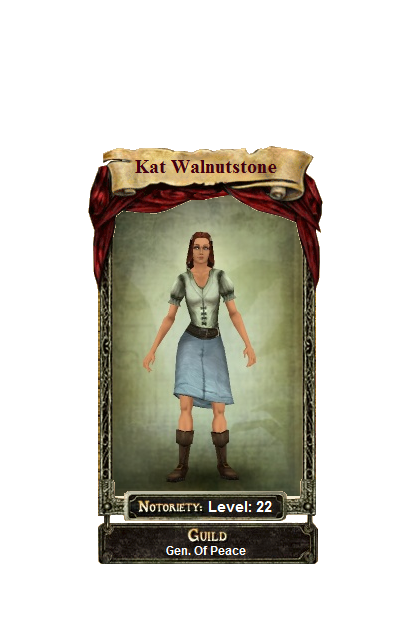 Kat Walnutstone is the little sister of Lawrence Daggerpaine. She is currently a top officer in the Gen. Of Peace guild.

Kat Walnutstone was born in London, England. She had all of fashionable and lady like stature London had to offer, since she was the daughter of a Wealthy noble. Problem was, she was a little "strange" compared to what people of London thought. She believed in spirits and voodoo powers, which even thinking about it would be looked down upon in the London High Society. Her parents kept trying to make her into a "perfect young lady," to no avail.

Heading to the Caribbean

One day, when she was walking around the London docks (where she wasn't supposed to go to), she saw a ship headed to the Caribbean. Her brother was a Commodore in the Royal Navy and was stationed in the Caribbean, so she wanted to see him and wanted to see the world, and learn it's creepy secrets... She begged her parents to go, and they thought it would be a good opportunity to teach her the horrors of an uncivilized society. They bought her fare to travel in the captains cabin, and she soon reached the Caribbean. Instead of hating the place, she fell deeply in love with it. She went to the best place she thought to learn the voodoo, her most favorite subject, Tia Dalma.

Life in the Caribbean

She spent years working with Tia, and became a master at voodoo and potions. After she mastered, she asked Tia where to find Law, so she could show him her new skills. Tia said that Law could not be found with the Navy anymore, for it had betrayed him, and instead head to the Island of Tortuga in a small village called Mariners Town. She bought a small ship with some money Tia gave her, and sailed to Tortuga. Upon reaching the town, she went immanently to go find Lawrence. When she did find him, they had a big reunion and went to the local bar to catch up. Kat decided to stay in Miners town, and be the gypsy. Things were very nice and peaceful, and Kat could do the things she loved, and in no dresses. But then, Jolly Roger attack Mariners Town. She used her advanced voodoo skills to fend him off, but she couldn't keep him off for long, and she and Law had to flee. She made a promise to take revenge on Jolly for destroying her home, and became a pirate, along with Law.

A Start to Infamy

Soon, Law found a guild called the Generals Of Peace. He quickly rose through the ranks, and left Kat behind. Kat was sad about that, but was happy her brother was so powerful. Lately, she hasn't been seen in the Caribbean, but rather around the world practicing high level voodoo magic and performing miracles such as bringing the dead to life again. When the GM left, Law became the new GM. He went and built the Gen. Of Peace, and appointed Kat a top officer.

Today, Kat is in the Gen. OF Peace Guild, and basic access. She is currently inactive. Kat is also a NPC on Peace Island and plays a role in the Peace Island Quest. She is now the official wedding planner for the Gen. of Peace guild.

Retrieved from "https://gamersfanon.fandom.com/wiki/Kat_Walnutstone?oldid=745590"
Community content is available under CC-BY-SA unless otherwise noted.