Start a Wiki
Welcome to the first Journal of Soar! These are a series of stories and such that have to do with a pirate named Soar. More will be coming! 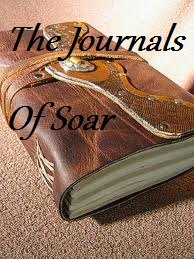 - Applies to all journals and pages made by:

In this addition Soar was 17 in age.

Today was a normal day, from the start. I woke up, tired and hungry, and went to work perfecting my dagger and such. I had been begged by Tia to do a quest, had pushed off for years. I didn't like Tia. She tended to not appreciate anything I did, she would just sit there and nod as a told her all I had done. Her rewards were small, as was her smile. What was wrong with her? Tired? Hungry? Mad?

"Okay, heres those dolls you wanted, from Tormenta." I said today, out of breath. I hadn't had a healer, open wounds from the cutlasses of the Thrall Captains dripped over Tia's table.

"Please, watch your blood." She said, disgusted. Oh! I'm sorry, I didn't know I could control 2000 open wounds bleeding like there is no tomorrow!

Like I said, that woman disgust me. I had learned "Respect your elders" but I had a very hard time with this.... voodoo master girl.

I don't think that today was filled of luck. I was about to get my go visit my old friend, Blackbeard, when I got on my ship, it sunk. And I swam for my life to shore. I'm an "Okay" swimmer. My bro, Captain Shadow Sail is much better. Then when I asked for it to be repaired, the dock worker decided to laugh and point at me.... I threw sand in his face and left.

So today I found my self joggling 9 quests and trying to level my staff, which I can barely carry, the one Tia gave me HAD to be the one made out of solid stone. I was excited to actually be able to lift my weapon, so I did the upgrade quest.

It just happened, that my War Frigate decided to sink the day that I had to sail from Island to Island. So I was forced to use this light galleon they call a ship. I was rich in gold at the time, but no matter how much I paid this fool, he wouldn't repair it today. "I'm to busy." "I will do it later." Ugh...

I sunk! Yea, when I was trying to find this so called "Orb". My gosh! Could you just put it on all the ships! Of course, it just had to be SO hard to find... So yea, I was trying to defeat the little bulge rat, when it just decides to go all beast on me, and yes, sink me! You see Mr. Dockworker, this would not have happened if I had my War Frigate! People these days.

So after I sunk, I had to do something else, I don't even know what it was, and then I was promised a staff. And guess what? I didn't get my staff! Ronald, Ronald, Ronald, you should learn to keep your word, I thought. I told him he wasn't fair and he walked away saying he had an "Appointment'. I will never trust him again...

So yea, I suppose this week was "okay"... not my best. People just kept, I don't know, getting me mad? It is Saturday and I am stuck doing all these quests, even though they are useless and boring in my opinion.

Why did they have to get me a quest in this cursed Ravens Cove place? I found myself running for my life from the rage ghost. I ran into a building that I couldn't see why it was still standing, and I died there. The tailor stared at me with a blank expression, and just stood there! You know, there is this wonderful thing called saving, she should try it some time.

Lovely, a dead skeleton thing, just laying there in a fountain, they should really move him. Sword still in had, and a sword in him, nice, I don't like Ravens Cove too much....

So about this new government I signed up for, the High Council? I think it is? So yes, I didn't to find a layer, and I though I found one in this Ravens place, when, you guessed it, another dead body is just laying there!

Okay, scratch that, I hate this week. I was WAITING to do the Raven's quest to get the fishing and potions extra reward right? And I accidentally talked to Mr. Fishing guy! No Sea Globe for me! Its just my luck. Well, I never liked fishing anyway, wait, yes I did, um.... yea there is no positive to this....

Retrieved from "https://gamersfanon.fandom.com/wiki/Journal_of_Soar_1?oldid=706817"
Community content is available under CC-BY-SA unless otherwise noted.