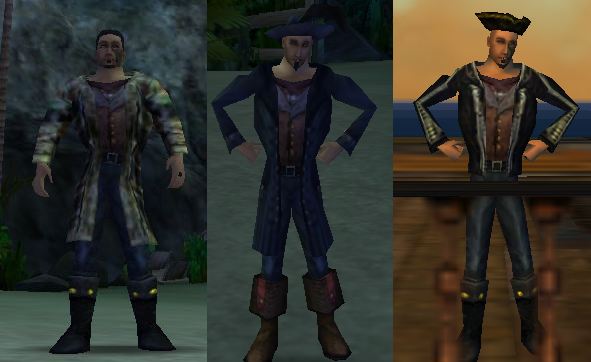 This is the official page of the user JackyWolf's main pirate. This is the third page for Jack Wolfspain, but the 2nd was dumb, and the first was an epic, EPIC, fail.

'Jack Wolfspain, born James Wolffe, was born on November 6, 1717, in London, England. He was very rebellious as a kid, such as when he let the family chickens free, or the time he set the King's pants on fire. Londoners said that he was a pirate at the age of five, and they had good reason to. He was always being chased by Navy Guards, stealing money and that sort. As well as his life in England, Jack always loved the sea. He would have dreams of sailing a ship through the waves. He wanted to be a pirate. When he was old enough, he was forced to serve as a British privateer on the HMS En-Garde. After six monthes on the warship, he escaped to France. While in France, he became fluent in French, wihich he already knew parts of . This became very useful for Wolffe, who had started to go by Jack. Sometime during his stay in France, he became a mercenary. He was added to a crew of French bounty hunters. For a short time,he servend on the French War Sloops, The Sabre and the Faucon. During a sea raid, Jack saw three Spanish War Frigates. The Sabre and The Faucon were quickly sunk by the Spaniards, forcing Jack into service on one of the Spanish Warships. Soon after, the crew comitted mutiny agains the captain, Danial Martinez. The ship was then sailed to Spain. Jack spent several years in Spain, and liked it very much. Townsfolk began to call him Wolfspain. Jack did not know why, but he kept the 'name. He aslo came by a young dog being chased by angry men. Jack stopped the men, and took the dog. He adopted the dog, nameing him Camden. He kept Camden for the rest of his time in Spain. Finally, he became a pirate. Leaving Camden with a close friend, he set sail for Tortuga on the Galleon San Ricardo.

On his way to Piracy

Somewhere while Jack was on his way to Toruga, he was captured by the English. He was thrown into the brig of the SOTL, HMS Tally-Ho. He was then brought to the small island of Rambleshack. He was imprisoned for a week, before meeting Jack Sparrow, who helped him bust out of jail. He then met Will Turner, getting a rusty, but sharp sword. He was told to find Bo Beck. He found and boarded the Grim Reaper, the ship of Bo Beck. Jolly Roger soon came, meeting Jack Wolfspain for the first time. Jolly killed Bo Beck, sunk the Grim Reaper, and forced Jack to swim to shore. Jack somehow found a way to get to Port Royal. There, he found his way to Tia Dalma. She told him more of a pirates two biggest enemies: Jolly Roger's skeleton Army, and The EITC Black Guard. She promised to tell more of the dark arts when the time came, and left him alone in the dark. As he was wandering through Port Royal, he encountered the Briitsh Navy, which he had developed a strong hate for. Three guards confronted Jack, asking him what his buisness was. Jack saw he was in front of the Govener's Mansion. Jack quickly defeated the guards, taking a small piece of paper from the pocket of the leader. Jack read the paper, and who knew exactly what it was. Rel ease orders for the Black Pearl! Without caring who saw him, he marched into the Swann's Mansion. Inside, he found himself face to face with Elizebeth Swann. He gave her the paper. after stamping the paper with her father's seal, She told him to find Darby Drydock, to get a small ship. He walked out, and began to look for Drydock. Jack knew that if he was caught with the release orders, there would be no trial. He would have the Hangman's Noose around his neck before he could say Oops. Reluctantly, Drydock gave Jack a Light Sloop called the Lightning. Then, after meeting Barbossa, getting a new pistol, finding Jack Sparrow once again, doing some jobs for Joshamee Gibbs, and so on, he started looking for the Black Pearl.

War for the Homeland

In August of 1744, sometime during his adventures, Jack stumbled along Capt. Skull X and one of his Officers. Jack had begun building a guild called Titan Marines, not knowing that the Guilds home island, Tortuga was already in use by Skulls Marines. There was a bit of arguing on that subject, so there was a Meeting. The meeting was held in the Cave of Lost Souls on Raven's Cove. The meeting consisted of Peace Treatys, lasting about an hour. It was agreed that the homebase of Titan Marines would be changed from Tortuga to Padres del Feugo. Right after the negotiations, it seemed that Jack had begun to go insane. He became very short tempered, constantly gettin mad at Skull X and Chris Swordbones. It was obvious that they were soon enemys. Jack then went into hiding for a while. Two months later, Jack found himself in his right mind again, and made peace with Skull's Marines. Skull X, Chris Swordbones, and Jack Wolfspain are all now friends. Pirates everywhere began to call this temporary disagreement the "War for the Homeland." This war ended before it started, but it could have led to one of the biggest civil wars in Pirate History.

Titan Marines is now, as Jack Wolfspain states, nothing. Shortly after the War for the Homeland. Titan Marines fell apart. Jack left the guild, making one of his best officers Guildmaster, and the name Titan Marines hasnt been seen since.

In August of 1744, one of Jack's best friends, Chris Firewalker, created a German Guild called Raider Rebels. It was not a very strong guild, having about 40 members. One of Jack's other friends, Tristum Warhazzard, was an officer in that guild. Warhazzard became greedy, wanting to overthrow the guildmaster and become the new one. He began to persuade some members of the guild to help him push Chris out. Jack became interested, and decided to see what Tristum was planning. He pretended to be loyal to Tristum, so he would know what he intended to do. He soon found out. He immediatly told Firewalker. Chris had suspected Tristum of treason, but was surprised that he had the guts to do it. Tristum soon found out what Jack had told Chris. Even then, he went to work. Using his rights as an officer, he booted every member and veteran on Chris's side. Chris was outraged, and did the same. There were only ten left. On Chris's side, there was Jack Wolfspain, Isiaha Brown, Sarah Stern and Edward Stormloather. On Tristum's side, there was Marc Swordstack, William Shadowwrecker, Kate Seahawk and Hikaru Squidpigge. Tristum challenged a PVP, and everyone accepted. Two teams. Tristum, side red. Chris, side blue. There were four PVP games. Tristum's team won one. Chris and Jack's team won three.Tristum and the mutineers agreed to leave the guild. Jack left as well, saying he had other matters to attend to. Jack Wolfspain never saw Tristum Warhazzard again.

In November of 1744, Jack created a guild called Jack's Wolfpack. It was his most known guild. It had up to 150 members. Up until about December–January, Jack and the guild had lots of fun. Everything fell apart when the co-gm, Nathaniel Lockshot, went missing. For some reason, everyone began to leave. Then only Jack, and officer Skips Flint, were left. Then, Flint's old guild needed him. He left. Jack deleted the guild. Jack Wolfpack was dismantled.

In January 1745, Jack stumbled upon Bill Plunderbones Tew. Jack asked to join Gen. of Peace, and he was guilded. He at once became one with the guild. He was made a Veteran, and then an Officer. He is now a high ranking Officer in the guild, and is on his way to Top Officer.

"Lifes' pretty good, and why wouldn't it be? Im a pirate after all."

"The existance of the sea means the existence of pirates."

"I only hope to die with a sword in my hands."

"There comes a time in most men's lives where they feel the need to raise the Black Falg."

"Why did I become a pirate? I became a pirate because it sounded a hell of a lot more fun than than joining the Navy!"

To be continued...
Retrieved from "https://gamersfanon.fandom.com/wiki/Jack_Wolfspain?oldid=706690"
Community content is available under CC-BY-SA unless otherwise noted.