Ivan's Adobe (Russian: Офис Ивана, literally "Office of Ivan) is the name of the building used by Tsar Ivan VIII. Built in 1689, the building remains located in its original spot in the castle of Padres Del Fuego. Last used by King George Louis I of Great Britain, the building's walls are covered with history. Tsar Ivan began his use of the adobe two days after his inheritance of the throne, right after Tsar Vladimir I. 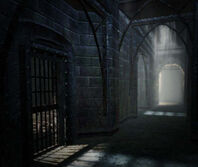 Wine Cellar
Add a photo to this gallery

Retrieved from "https://gamersfanon.fandom.com/wiki/Ivan%27s_Adobe?oldid=706658"
Community content is available under CC-BY-SA unless otherwise noted.