Militia Head Of Branch is Redeagle,Tom

Not enough information is available for this section!

TODAYS THE DAY OF THE ELECTION! In a couple of hours the election will begin, a recording will be posted.

Congratulations to: Lawrence Mcwallace! He won the guild election. It was a close call though

Stormwalker: Still loved by everyone won by 91(:

The Votes (recording) The votes were not taken by me, (Sir Edgar Wildrat of the EITC) but by an impartial judge 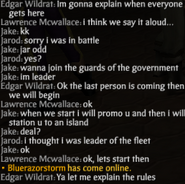 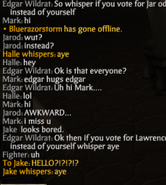 Announcement of who won: Congrats Lawrence! Sec 5
Add a photo to this gallery

1 of 3
Add photo
Retrieved from "https://gamersfanon.fandom.com/wiki/Italian_Empire?oldid=724216"
Community content is available under CC-BY-SA unless otherwise noted.