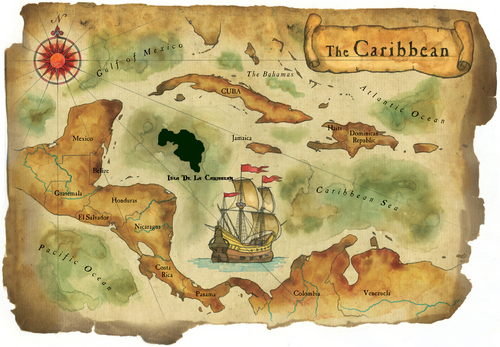 Isla De La Caribbean was discovered by a anonymous Spanish Privateer in the late 1600's. The Spanish Privateer claimed it in the name of Imperio español (Spanish Empire) TAfter the privateer's death the islanders bacame unlawful citizens of the islands and then converted into priracy.

After the citizens converted to piracy a young captain named George Tooth of Great Britain open fired on a small village on the beaches of Isla De La Caribbean. About 300 women died, 42 men were then killed, 90 of them forced to join the British navy.

The British now have taken over the island and then renamed it "Port George" in honor of Englands king George the first. One day a young Spanish/English pirate named Captain Marc Cannonshot with his flag ship the Scruvy Dog then open fired on George naval ship. After the British ship was sunk Captain George Toothe was then maroon on a small island off the coast of the Spanish colony Florida.

After the island was liberated by Marc he then became the Pirate Lord of Isla De La Caribbean with the support of the citizens of island.

Retrieved from "https://gamersfanon.fandom.com/wiki/Isla_De_La_Caribbean?oldid=706631"
Community content is available under CC-BY-SA unless otherwise noted.