Born in Windhelm, the young Dunmer's powers would become apparent at an extremely young age, having killed his caretaker at the age of four and destroying the minds of both his parents at six, though not before feeding on their acrid fear and using it to build his power. As a young teenager, Tenebrae would scour the land for knowledge and power, already possessing the intellect of an ancient through years of living a reclusive life within the Windhelm Library. Soon enough, the teenager would be discovered by strange man, sharing Tenebrae's heritage but not his spirit. The man - who called himself Garan Marethi - sensed the youngster's power and offered to increase it tenfold. Intrigued, Tenebrae accepted Marethi's offer, not realizing until his last moments as a mortal that he intended to make him a Vampire.

"Not a typical Vampire," Marethi would explain. "We did not gain our powers by getting too close to a     Sanguinare carrier. Our powers derive from Molag Bal - the Lord of Domination. We are Vampire Lords."

As soon as he had taught the youngster to use his new powers, Marethi left him, returning to his home in the farthest reaches of Skyrim and only leaving this cryptic message: When the time comes, you will join us and be among the most powerful Vampires in Skyrim. Remember the name Volkihar, and don't trust any psychic mudcrabs.

Having been made an adept Vampire Lord, Tenebrae, now the self proclaimed Lord Vitiate, traveled north to the College of Winterhold. There, he spent several years mastering Destruction and Illusion magic, proving to be among the greatest students in the College with his unrivaled powers in mental domination and seemingly unlimited power. After deeming the College unworthy of his immense power, he vanished one night, stealing a myriad of knowledge from the Arcaenum before leaving.

Once again he would live as a nomadic mage, traveling all of Skyrim and learning to direct his powers to devastating effect. In one of his travels to an ancient Dwarven ruin, he would apprehend a Dragon Priest called Morokei, a being of immense magical power that began manifesting with the return of Dragons to Skyrim. Claiming Morokei's Mask and Robe as spoils of victory, Lord Vitiate would don his infamous attire for the first time.

Finally, when his shadowy heart told him the time was right, he began his travel to Castle Volkihar, where he knew he would find what he was looking for. Located on an island southwest of Solitude, Castle Volkihar was the home of not only Garan Marethi, but an entire order of Vampire Lords identical to him, lead by the mysterious Lord Harkon.

Graciously welcoming Vitiate as one his own, Lord Harkon formally inducted into the Volkihar Clan. He would be introduced to his new enemies, the Dawnguard - the famed Vampire slayers renowned throughout Skyrim, and the greatest threat to Volkihar. He would soon be taught to hone his Vampire Lord powers even further by Harkon himself as well, though whether there was much to teach is up to interpretation.

Though Lord Vitiate appeared as loyal a Vampire as any to Harkon, his mysterious true intentions were only his own to know. From his very induction, Vitiate planned to overthrow Harkon and seize control of Volkihar. As time went on, he would secure the trust of Harkon and his devotees, all the while gaining power to eventually destroy him completely.

The Spoils of Victory 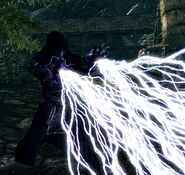 Retrieved from "https://gamersfanon.fandom.com/wiki/Intense_Wizardy_(Lord_Vitiate)?oldid=731123"
Community content is available under CC-BY-SA unless otherwise noted.