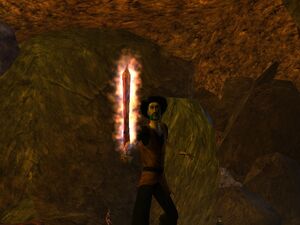 At its strongest, the blade is cloaked in red fire and blue ice.

A Story of Reformation

The story of this legendary cursed blade started when El Patron's crew mined a mysterious metal found on Raven's Cove. El Patron forged the blade out of this mysterious metal. The sword was known as the World Eater Blade. At least, it used to be called that. El Patron's best blades forged were forged from this metal. Upon the timely death of the good captain, his blades were stolen by various members of his crew and were scattered across the Caribbean. Eventually, most of the blades got back to Raven's Cove. However, some of the remaining crew members were lost to Davy Jones and were kept in secret upon Isla Tormenta.

Stpehen looted this sword one day, he used it with great finesse. While he was slaughtering EITC soldiers in Beckett's Quarry, the sword was kicked out of his hands by a mercenary. It had dropped into the lava. He chose to finish off the mercenary before retrieving his sword. After noticing that the sword had fallen into the lava, he put on fireproof gloves. Stpehen picked up the sword and noticed that it had... changed.

He studied the sword, noticing it had ever lasting flame and perpetually freezing ice. He walked outside the Quarry with the sword and dipped it into the ocean. The fire did not go out. He left the sword in the sun all day, the ice did not melt. It was a most peculiar thing. Nothing he could do would put out the flames, nor melt the ice. 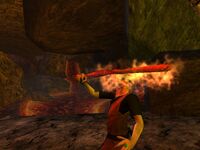 Later on, he showed the sword to a blacksmith, who had told him that after falling into the lava, its true powers had been activated. These true powers were said to be blood fire, freeze sweep, drain voodoo and drain health. The sword has been somehow strengthened by the lava. Upon using freeze sweep, the blade becomes cloaked in fire and ice! 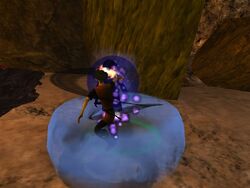 Stpehen was using this sword when he heard a voice in his head. It was a strange demonic voice. The voice was talking to him and all the enemies in the area. It said "Fight me! My ice with freeze you to your soul! My fire will burn you to a crisp!". After hearing that, the enemies turned and fled. Stpehen stood in one place, stunned by what he had heard... Had the sword talked to him or was it just his imagination? Soon after that, the sword said "Yes, I am talking, you twit. Now let's kill more enemies!" Stpehen didn't argue, he continued to kill enemies, noticing the fire and ice doubling in power, then tripling in power. The sword was collecting the souls of his defeated enemies, the more frightened they were, the stronger the sword got. 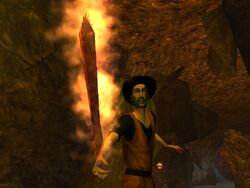 There was an invasion on a quiet server, so Stpehen tried his hand alone. He swiftly defeated the enemies, his sword glowing with delight. The sword ordered "More, more! Let us feast on the soul of Jolly Roger!" He agreed to that and charged at Jolly Roger, sword ablaze and chilled with ice. After a long and grueling battle, Jolly Roger and Stpehen were low on health, Stpehen used a tonic and stole the last of Jolly's voodoo. 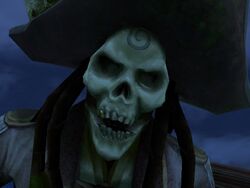 Jolly was helpless, Stpehen looked upon him and used blade storm to finish him off. Jolly Rogers' soul was absorbed into the blade while his body sunk into the ground! "These pitiful pirates are foiling me plans! Fall back...", but his soul had already been absorbed before he finished talking.

When Jolly Rogers' soul was absorbed by Stepehen's sword, all undead fell to the ground, but rose up again. Step noticed that when he held the sword out in front of him, the undead would follow. The sword noted this, saying "It seems as though we have complete control over those undead scabs. How about we use this power to invade British and EITC forts?". Step thought for a minute then agreed, stating "This will be fun." He looked at the sword for a minute, then noticed after Jolly Roger's soul had been absorbed, it now possessed Ghost Form! 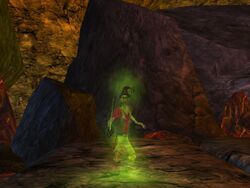 Invasion of the Forts

They began to invade the forts, starting with Kingshead, which quickly fell. Stepehen killed more Navy and EITC as the undead had. The last enemy left was Remington the Vicious. After a long battle, Remington was defeated. Again, his soul absorbed into the blade. Step had no idea what ability Remington's soul would grant him. In a few seconds, the sword spoke to him. It stated "Yes, you killed Remington! Now my attack has gone up by 20 points! Now my attack is 125!"

Retrieved from "https://gamersfanon.fandom.com/wiki/Hoja_Fr%C3%ADa_de_Fuego?oldid=706490"
Community content is available under CC-BY-SA unless otherwise noted.