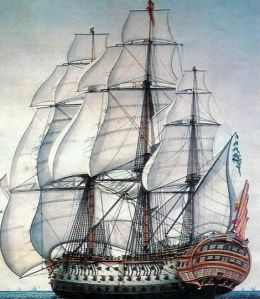 HMS Kronus is a stub.
You can help Gamers Fanon Wiki by expanding it.

The HMS Kronus is an ASOTL, that Captain Robert sailed and controlled in the The Mystery of The Stolen Design. Captain Robert although was ruthless in battle with this valient vessel. Before his death Captain Robert made sure that this design made it to his company, EITCSI. Sadly some of the plans were a bit distorted so Robert Macmonger had to alter the plans for this vessel. Eventually is was designed as a advanced war brig instead. The fate of the HMS Kronus was it's sails were cut up in a terrible storm and the hull was badly damaged. The ship was eventually destroyed in a horrible ' accidental ' explosion. Her remains can be seen off the shores of Port Tariff.

Retrieved from "https://gamersfanon.fandom.com/wiki/HMS_Kronus?oldid=748293"
Community content is available under CC-BY-SA unless otherwise noted.