The Future of Warfare

The HMS Enterprise is a first rate Sky Ship, designed and built by Reaver Industries in 1723 originally the HMS Heart of Oak, Reaver Industries bought her, pull her to pieces and rebuilt her as the ship she is today, mounting 103 guns, featuring the largest gun ever made the "Ground Shaker" mortar, She is commanded by Commodore Lord Richard Venables of the Royal Navy, She currently is stationed in Kingshead and watches the seas of the caribbean waiting for her enemies to make the fatal mistake of chalanging her might! 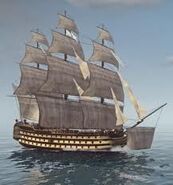 After Conversion
Add a photo to this gallery
Retrieved from "https://gamersfanon.fandom.com/wiki/HMS_Enterprise?oldid=706383"
Community content is available under CC-BY-SA unless otherwise noted.