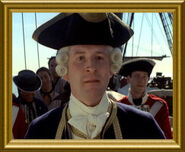 Gillette in his first days in POTCO

Gillette and his Bodyguard

Gillette in his Lieutenant Uniform.

Gillette use his favourit emotion.
Add a photo to this gallery

Gillette is a Navy Lieutenant in Port Royal. He began his career at sea beating ships. First it was pirated. After rumors spread his works he was asked to join the Navy Beckett and so all his works have been washed.

Lieutenant arrived, he met the son of Admiral Norrington, Richard Norrington. A veteran Lieutenant. They became good friends. After all the soldiers Richard betrayed Beckett's.

Gillette has duel with Richard's bodyguard.After Gillette win the duel and kill Richard's Bodyguard, he fell dead on Fort Charles.

Richard came to revenge his friend .Gillette and Richard had a duel .Richard win and Gillett die with last words : ,,Richard i'm sorry , i just want to know who is a good Lieutenant , now i know who is .Richard , you are a nice Lieutenant , just kill Beckett thank you ...."

Retrieved from "https://gamersfanon.fandom.com/wiki/Gillette?oldid=706271"
Community content is available under CC-BY-SA unless otherwise noted.