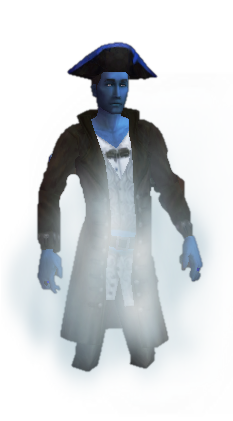 The Ghost of the old EITC Lord "Cad Bane"

Caddius Archibald Bane better known as simply Cad Bane was the leader of the Co. Republic. He was very friendly if you were nice to him. He can get his men to listen to and respect him very easily. He has loyal friends and guildmates he can call upon if things get violent. The funny thing is that some of his guildmates are a higher level than he is but they are extremely loyal to him. He also started The Second Great EITC Civil War with another EITC leader, Captain Leon. Very little is known about his early life, that he was in the East India Company Navigation and Tactical Training Academy, also it is said that after he left the academy he was a top bounty hunter for a time before joining back into the EITC. He was fourth in command of the EITC .

A sighting
Add a photo to this gallery
Retrieved from "https://gamersfanon.fandom.com/wiki/Ghost_of_Cad_Bane?oldid=736950"
Community content is available under CC-BY-SA unless otherwise noted.