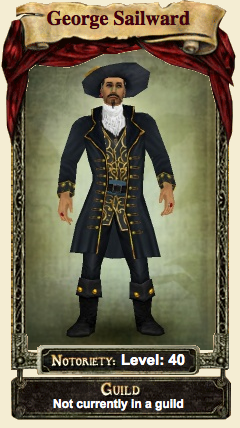 Goerge Sailward was born in Madrid, Spain on February 14th, 1721.  He was the youngest of 3 brothers, his Father was a lawyer, his Mother stayed at home tending to us. When he was young, he always looked up to Phillip V Clemente and his Generals. he dreamed about serving under them, he always had thought I would do the citizens of Spain a great favor by serving in the Spanish military.he As he grew eventually to 16, I enrolled in the Barcelona Military Academy. There I learned skills, such as horseback riding, how to make musket balls, etc. I also had the privilege of knowing  the cunning tactics Phillip V Clemente had used during his campaigns against Spain's enemies. After brutal training, I waited for the tensions between Spain and Britain to snap. They eventually did, and I was delighted I could finally serve my country.

The first battle he was in was at Toulouse, where Redbeard ambushed Clemente's massive army in hopes of wiping out a chunk of his force. During this, my regiment was in total confusion because of Redbeard's artillery. In hopes of my regiment and several other regiments not retreating, I rallied everyone then swiftly engaged the advancing British-French force.

Later on in the Paradoxian War, I rose through the ranks quickly eventually becoming the youngest General serving the Spanish Military. Phillip V Clemente was so honored by my determination, he legally adopted me as his son. Though, the happiness that engulfed Spain was short-lived.

Later on after the Paradoxian War, Spain was an economic disaster waiting to happen. Even worse, Britain still had strength to get up. Though Spain had completely ( or so we thought ) destroyed Britain and their armies, they had declared war on Spain in a desperate attempt to regain lost territories. They had hoped that because of Spain's economic situation, Clemente would be unable to mass the huge armies as he did in the Paradoxian War. Clemente soon trained his most skilled regiments in hopes to balance out how outnumbered he was. His efforts were strong, but Britain out-numbered him and his Generals 10 to 1 in almost every battle. It ended up Spain losing, and Britain taking 1/4th of Spain's land.

People had thought Spain wasn't the most powerful anymore, and that all of Spain's glory had been lost. This caused many Generals to resign, or defect over to Britain. Through these hard times, only the most loyal have stayed. I believed it can be restored, and kept. I was eventually right, and a few, much smaller wars were fought to slowly regain all the territories that Spain had lost. We are still fighting them, unfortunately. I can only hope we can restore the Golden ages of Spain's history. Viva La Espana!

Retrieved from "https://gamersfanon.fandom.com/wiki/George_Sailward?oldid=739405"
Community content is available under CC-BY-SA unless otherwise noted.