Stats and Other Facts

The G.O.P. Peace was made by Daggerpaine Industries as the main Flagship as the Gen. Of Peace Guild. It is the same type of ship as Blackbeard's Queen Anne's Revenge. It has all the same stats as a the same as the Queen Anne, but also it shoots long range Lightening Bolt broadsides. It is highly deadly. It's captain is none other than Lawrence Daggerpaine. It is usually seen around Peace Island. Also, if you are not welcome to the island, it attacks you if you come into a it's long range broadsides. You would then have to board it like the Queen Anne, and deafeat 5 waves of lvl 50 Gen. Of Peace guild members. They look like regular players, except they attack all who oppose them. Notable people on board are Lawrence Daggerpaine, who attacks with a broadsword; Bill Plunderbones, who attacks with a repier; Bess Firebones, who attacks with knives; Bounty Hunter Bill, who attacks with a blunderbuss; and Kat Walnutstone with a Staff and Doll combo.

Some pictures are from Google, and others are from Captain Goldvane. 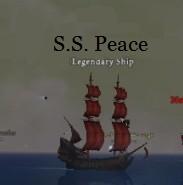 Add a photo to this gallery
Retrieved from "https://gamersfanon.fandom.com/wiki/G.O.P.S._Peace?oldid=746608"
Community content is available under CC-BY-SA unless otherwise noted.