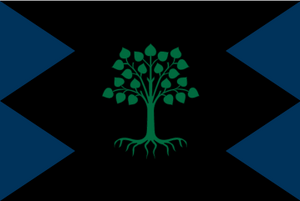 The Fuegon Dominion of Outcast Isle is a territory of the Commonwealth of Padres Del Fuego. It was founded as a sovereign state by Richard Cannonwalker on March 6, 1746. It was founded after Richard believed the island had the potential to be inhabited if the Stumps and Fly Trap creatures of the island were under control. A group of cannibals also inhabit this island, though they're friendly and helpful in Richard's efforts to make the island inhabitable for pirates. The 8th Brethren Court was to originally use this island as a base of operations, but decided against it.

In the early years of European exploration of the Caribbean, a group of pirates inhabited the small island. they built small houses and a dock to be used by themselves and fellow pirates. For many years, pirates had control over the island. However, when Jolly Roger rose to power in the Caribbean, the island was one of his targets on his search for Jack Sparrow.

After Jolly Roger invaded, the pirate citizens of the town were in shock. Many of them fled, only to be sunk into Davy Jones's Locker and risen back from the grave to serve Jolly Roger. The ones that did not flee were victim to one of Jolly Roger's devastating tricks; turning various pests, like weeds and trees, into Fly Traps, Stumps, and various other demons. These demons quickly devoured any survivors. The Stumps even went as far as to completely demolish any buildings and their remains.

For many years, these undead creatures had a tight grip over the island. Many people who came to the island were devoured, with very few exceptions (including the Outcast Isle Cannibals). This was the case for many years. The few that could survive on the island saw it as a good hideaway, however. This was not the case with most, though.

After the island was stabilized and made inhabitable for medium-sized quantities of pirates, the Eco Warriors decided it was time for them to leave. A few of the island's citizens and some visiting pirate decided to make a small military, The Outlanders, to take the place of the Eco Warriors as far as defense goes. The Eco Warriors left to help Cuba gain independence from Spain and become a sovereign port, much like Outcast was becoming.

To be added soon!

East Isle (AKA Devil Root Island) at nighttime from afar

An uninhabited island from afar at nighttime
Add a photo to this gallery
Retrieved from "https://gamersfanon.fandom.com/wiki/Fuegon_Dominion_of_Outcast_Isle?oldid=705843"
Community content is available under CC-BY-SA unless otherwise noted.