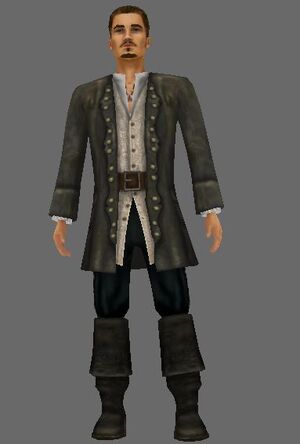 Haco Vineat is a Fan GM or Game Master in Pirates Online.

As a child, Haco came from a very very wealthy family, the Salsons. His original name, as a boy, was Ron L Salson. From the beginning he knew he did not want to be an EITC Lord. His parents, Seo and Karina, were both EITC high ranking members. His dad Seo ran the EITC, he pretty much owned it at the time. His mom was second in command, he was a wanna be pirate. While he had hopes and dreams, his parents did as well, they insisted that he took his father's place as the commander of the EITC, he said okay out loud, but knew he wouldn't in his mind. He in fact, wanted a whole other job, the be the assistant of King Shadow Sail, the King of Italy and President of the Official Caribbean Government. He always admired Shadow, his parents hated Shadow though. Shadow was not EITC, nor Navy, he was just a well known Pirate King.

Haco's parents were very strict. As a child of 10, they would beat and harm if he didn't do exactly as he was told. Haco would walk out of his house looking like he came from an alley way where there were nothing but violent gangs, but no one could do a thing. Haco's house was heavily guarded by the EITC, every time someone would attempt to save Haco, they would be thrown in jail. That would not change, however, Haco did do something to ensure his safety, he sent a letter to Shadow himself. The letter read this:

My name is Haco Vineat in-case you do not know who I am, I am the son of Seo Turner, Commander and Chiefif of the EITC. I wish to not complain to you sir, but I must. For, my parents are extremely harsh to me, beatings and such are very common. I am now at the verge of death, I am only 13, and I plead for your help. Please save me from this living hell Shadow.

Though it took a while, Shadow wrote back after three weeks of hell. His letter back read this:

The letter you sent me deeply depresses me. I am so deeply sorry that your childhood is filled with these unfortunate events. Let me assurere you, I will come to your rescue. Please stay at the current location you are at now, I will send a fleet, Fleet Shadow, to come save you.

Like Shadow had promised, on Monday June 5, 1658, Shadow sent Fleet Shadow, along with over 600 skilled assassins and warriors, to save Haco. It was a tough match and lasted over a week. The EITC refused to hand over its future leader, Haco. Shadow refused to give up. The fight got scarce for Shadow on the 5th day, out of 8 days. Many of Shadow's men were dying and the EITC was staying strong and fierce. Shadow knew he needed to do something or his whole army would go up in smoke. Shadow was on the SS Shadow while at the war. There were 30 other war ships along with the SS Shadow, but the SS Shadow was the most powerful. It was the middle of a fight, when Shadow took the wheel, and from his ship, sent 30,000 broadside cannons flying toward the EITC compost where Haco was living. This heroic act killed 659 of the EITC soldiers, it is also the act that many say, made them win the war. 300 of Shadow's men died, but 1,000 of the 1,000 EITC men died as well, the plan was a success, Haco was now free.

Shadow knew that Haco was not in the best shape. Haco now had no parents, they were left at the EITC compound, and he also had no real family anymore, for, the family was as well left at the compound. Shadow knew he must support him. He was only 14 and Shadow took him in as his son.

Shadow and Haco got along great. Much better than his old parents. Shadow, like Haco's original parents, had plans for him. Shadow wanted Haco to work with him when he grew up, Haco was more than happy to agree to the deal. So, Haco lived his childhood as the son of Captain Shadow Sail, it worked out great for both of them, until one day.

"My parents, they're coming," said Haco in a disturbed tone.

"They sent me a letter, today, it said:

As your parents, we have the right to control you. We are coming to get you and bring you back to the EITC, like it or not, when you get back, you will be silverly punished.

"Don't worry son, they want a fight, we give them a fight.﻿"

The rest of this story were not recorded, but we do have this quote from Shadow,

"The fight lasted 9 days, many of my men were injured beyond repair and died. Haco himself stayed at the castle I live at and thankfully, did not fight. My men protected Haco, and he is now living with me. He is very happy and will continue to be for years to come."

Retrieved from "https://gamersfanon.fandom.com/wiki/Fan_GM_Haco_Vineat?oldid=706093"
Community content is available under CC-BY-SA unless otherwise noted.