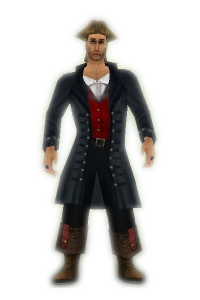 About
One day, Lawrence Daggerpaine, Bill Plunderbones, and Bobby Moon were hanging out. Bill and Bobby were street fighting for fun, when Lawrence was punched in the face. Bobby had accidentally hit Lawrence with a Shadow Blast, and turned Lawrence evil! Bill was able to make Law turn back to normal, but that evil is still within him, and will come out if you make him mad. When Lawrence Daggerpaine gets mad, he will turn evil, and is not at all scared to murder you with a knife in your back, or a bullet to the head. Evil LAwrence also does a lot for La Mafia, being so evil that he does not care what he has to do.
Weapons
He uses special weapons that can kill you with no mercy; these are:
Dress
Evil Lawrence Daggerpaine dresses a lot differently than normal Lawrence. His clothing choice includes:
His eyes also become dark around the edges.
Gallery

Evil Lawrence, dressed as a captain, fighting Simon Redskull after a pvp where Simon cheated (Lawrence is punching Simon in the face).

A close up of Evil Lawrence
Add a photo to this gallery
Retrieved from "https://gamersfanon.fandom.com/wiki/Evil_Lawrence_Daggerpaine?oldid=706055"
Community content is available under CC-BY-SA unless otherwise noted.