Eliza was born in Southampton, a major English shipping port, into the Creststeel family - owners of a small, but profitable trading company. She grew into a vibrant, strapping lass, nearly as tall as her older brother, John and just as independent.

However, business dealings over the years had left the firm and her middle-class family in debt. John took over the company, but to help with more immediate money issues her parents urged her to marry into the family of a competing firm.

Not wanting to be a burden on her family, but unwilling to sacrifice her freedom - Eliza set off for the New World. The Caribbean can be a treacherous place for a young woman, but fortunately she fell in with a buccaneer named Yellowbeard. He helped her gain even more experience handling a ship, even how to man a cannon - as well as how to defend herself in the lawless towns.

Over time, the two friends parted ways but Eliza made a fast friend in a young pirate named Kat Wildbones of the Uncle's Mafia guild. Becoming a member of the pirates, Eliza became more independent, even leadings in plunder raids. Earning the respect of her guildmates, she became an officer and set about putting the collective wisdom of her guild to paper to help other inexperienced sailors navigate the dangerous waters of the Caribbe.

Sadly - the Uncle's Mafia, like many a pirate collective, fragmented and many members went their own ways. Friends Samantha Firebreaker and Captain Jake formed the Remnants, and Eliza sooned joined her mates as Communications Officer.

Several months later, the Remnants re-organized into the Elite Theivery Co. - with Eliza as Guild Master.

At it's peak, the ETC had more than 500 pirate members, creating the split guild Elite Thievery Corp.

Eliza Creststeel can also be found in other game universes including, Defiance, Guild Wars 2, and Star Wars: The Old Republic, Dragon's Prophet, etc. 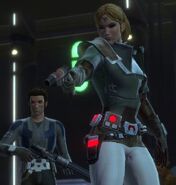 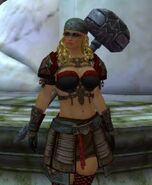 Add a photo to this gallery
Retrieved from "https://gamersfanon.fandom.com/wiki/Eliza_T._Creststeel?oldid=755178"
Community content is available under CC-BY-SA unless otherwise noted.