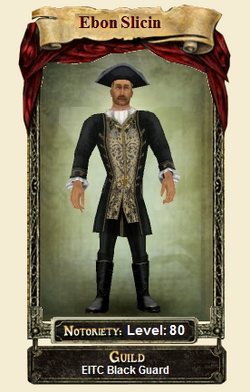 Ebon Slicin was a highly famous Black Guard member, before his death at the hands of Jolly Roger's soul-bearer, Heartripper.

Ebon Slicin was born in the late 1600s to a group of English nobles, who had many ancient antiques. He was always interested with them, so he joined the Black Guard to be brought around the world. He was so good at his job, he was accepted into the Abu Nar Clan.

On his travels, he found many weapons, navigation items, and even ancient remedy tonics. When his parents finally died, he inherited the mansion, and hid his weapons in the cellars below. He became the mystery of Manchester, which is where he hailed from.

One day, Ebon received word from the head of the Black Guard that he would be sent to the Caribbean, as a permanent post. He knew he couldn't leave his hoard behind. He gathered his hoard, and placed it upon his ship, the HMS Black Swan.

When he arrived, he found himself a large island, and hid his hoard in its deep underground caverns. The main entrance was in the smallest cellar in the center of his mansion., but he built other entrances. Everywhere there was an entrance, he built a small house over top. However, some weapons he could not be kept away from, and he kept them with him at all times.

Ebon's crew, Slicer's Inc., stayed in the small shacks, and only had partial access to the mines. They served him out of fear.

Ebon Slicin met his death twelve years after building his beloved island. He was walking along the beaches, when on the horizon he spotted a ship. He thought it was an EITC freighter, coming on a round trip, so he waited on his magnificent dock. Only when it was too late did he realize it was not an EITC ship, but the Harkaway! He gathered his crew, and they put up a valiant fight against Jolly Roger, but to no avail. When the Harkaway ported on the isle, Jolly Roger disembarked with his soul-bearer, Heartripper.

Ebon was eventually the last man standing, and even he could not hold out much longer. He was chased all the way into his very lair, in the center of the caverns. There, he died.

Ebon's ghost has been seen roaming the halls of his caverns, lost and infuriated. 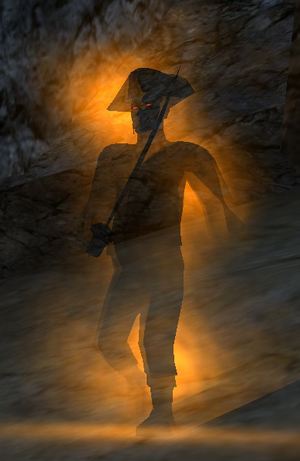 Because Ebon is now a ghost, these are his stats:

Weapons—Hs favorite weapons from his cache (in development)

Retrieved from "https://gamersfanon.fandom.com/wiki/Ebon_Slicin?oldid=756584"
Community content is available under CC-BY-SA unless otherwise noted.