History of the dagger.

The Dagger was crafted by the same blacksmiths that crafted the sword, however it was not lost when the Revenche Perdo sunk. The dagger was lost before the ship sunk. Capitaine Guirlande was on a voyage to ravens cove, on a sloop called the Fantaisie Explorateur. When he landed at the island everything was normal, dogs ran around the island people were coming out of a local pub called The Ghostly form. As he sat down to have a drink he heard cannon fire and screaming, as he ran out side he stood there jaw dropped. What he saw was unbelievable. Walking corpses, dead people, killing, wielding swords. as soon as he came to his senses him and his men gathered as many townsfolk as they could and went to the mines the took shelter there for days, until hunger and dehydration took over rioting, stealing of food it swallowed the mines fully, soon people started to leave the mines, little did they know Jolly Roger was watching as soon as he saw them he opened fire on the mines, rocks began to collapse many people tried to go deeper into the mines but were sealed in for an eternity by the rocks. Soon Skeletons swarmed the mine, Capitaine Guirlande tried to fight them off with the dagger but as he was fighting one off them, rocks collapsed burying the dagger. When he finally realized it was to late to save the island he boarded his ship and tried to sail away, but jolly roger fired a lethal broadside at the Fantaisie Explorateur damaging the hull severely, the ship sailed to cuba where it sunk just off shore, his men swam to the island where they acquired the Revenche Perdo from a French Privateer.

Can Only be aquired at Raven's Cove.

One of Jolly Rogers soldiers 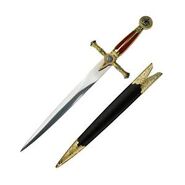 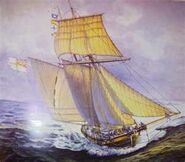 Fantaisie Explorateur
Add a photo to this gallery
Retrieved from "https://gamersfanon.fandom.com/wiki/Dagger_of_the_Legendary_Capitaine_Guirlande?oldid=721821"
Community content is available under CC-BY-SA unless otherwise noted.