Here is a list of the current/previous Lord Marshals, or, leaders, of the EITC. This should clear up any confusion with who was and was not an OFFICIAL EITC leader. 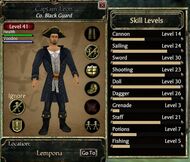 Retrieved from "https://gamersfanon.fandom.com/wiki/Current/Previous_Lord_Marshals_of_the_EITC?oldid=705702"
Community content is available under CC-BY-SA unless otherwise noted.