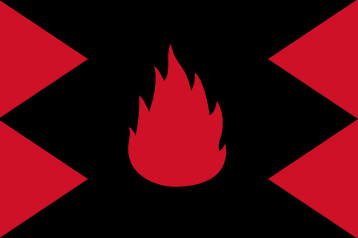 The Commonwealth of Padres Del Fuego is an island in the Caribbean under the leadership of Jeremiah Garland. It was established as a dominion under Christopher Crane on March 7, 1746. However, a shift in power has put Richard Cannonwalker in charge on April 5, 1746 (though leadership has changed once again since then). Briefly between May 7 and May 16, it was ruled as a Constitutional Monarchy, but has since become a Republic.

Due to a large portion of the population being made of British and Spanish immigrants, the official languages of the island are English and Spanish, along with various other vernaculars spoken by immigrants to the island. The demonym of the people living on the island is "Fuegon," regardless of whether or not they were originally from the island or they immigrated.

Because of the island's location in the far southeast of the Caribbean and the lack of many major islands nearby, Padres del Fuego remained one of the last islands in the Caribbean to be settled by humans. Cave drawings present in the Catacombs depict an early native people, assumingly of Mesoamerican origin, who inhabited the island around the 5th century BCE. However, due to the island's rocky soil and volcanic slopes, agriculture was a challenge for these people, who were reliant on agriculture for a proper diet. These inhabitants either went extinct from starvation or sought settlement elsewhere, leaving the island uninhabited for several centuries. Then, around the 11th century CE, a second wave of indigenous settlers, perhaps migrating from Cuba, settled on the island. With a diet focused more on seafood and game, these people were much more successful compared to the previous inhabitants of the island.

In 1517, shortly after Spanish and Portuguese colonisation began in the West Indies, Francisco Hernándes de Córdoba, a Spanish sea captain and conquistador sailing from Cuba to Yucátan, blew off course and was the first European to discover the island of Padres del Fuego. Going ashore with roughly fifty Spanish marines, he was met with no hostility from the natives. Córdoba officially claimed the island for Spain, and began trading with the natives. It was then discovered the prominent amount of ores on the island, namely gold and silver, that were harvested by the Spanish from the island's deep mines (today in the area known as Beckett's Quarry). Upon naming the island, it was Córdoba who coined it "Padres del Fuego", due to the massive volcano the island is famously known for, and the deep lava fields that are scattered about the land.

Rebellion from Spain and Rule by Christopher Crane

For over 200 years after its discovery, Padres Del Fuego would be ruled over by the Spanish. They would use the services of the natives and poor European immigrants coming over to mine for gold and silver in the island's cave systems. Many of these immigrants were of British decent as well as Spanish decent. After a while, the British eventually used their strong numbers on the island to set up a fort known as Fort Dundee and begin a mining operation of their own.

He ran the island as a pirate port, using forces from La Mafia and his own cult (Hermit Rangers) to defend the island from outside attacks, civil wars, and various small rebellions. Any kind of opposition from Crane's agenda was met with harsh consequences, mostly from La Mafia and without his order.

During Crane's rule of the island, citizens began to feel turbulent and disappointed over how the island was. Therefore, the citizens got together one evening and started a large protest rally against Crane. Crane's associates originally wanted to send their hitmen to kill the protestors, but Crane realized that most of the population was in on the rally. Additionally, after abandoning causes at Outcast Isle, The Outlanders, lead by Richard Cannonwalker, helped in the rally. When La Mafia sent men to try and keep the citizens calm, The Outlanders fought them off.

After almost two non-stop days of protesting, Crane had no choice; the other Caribbean dominions supported Richard over him. Unless Crane wanted to enter a full-fledged war with forces he couldn't defend well against and lose his trade business, he was going to have to resign as Grandmaster of the island.

On April 5, 1746, Christopher Crane resigned as leader of the island. Cannonwalker granted Crane amnesty for the fights that happened and even offered Crane the option to stay, to which Crane denied. The citizens were happy once more, but faced a problem; who was to be their leader? Through a democratic election, they elected Richard Cannonwalker, a leading figure in the protests, as their leader.

As soon as Richard became leader of Padres Del Fuego, he began working to fix the island's state. He first demanded that his protestors release any Crane loyalists on the island to go free on the island or leave as they wish. He also loosened up the policy on immigration to the island, so many immigrants from various places could come, creating a melting pot of culture.

To prevent civil wars on the island, Richard also decided to remain friendly with the British at Fort Dundee, offering them trade relations in hopes that they'd feel the same way of him. Richard also attempted to regain control of the island's silver mines from the East India Trading Company, creating more jobs for the citizens of the island. Eventually, a deal was struck; both parties would have limited control over the mines.

On May 7, 1746, Governor Richard Cannonwalker repackaged the infrastructure of Padres Del Fuego. He converted the island into a Constitutional Monarchy. With Jeremiah Garland as his Prime Minister, he began to construct a constitution. Until said constitution was to be completed, Richard claims that the current constitution he is to serve under is "a stack of papers containing the previous laws passed for the island." Although most people are content with Richard as their king, a few protest.

However, on May 16, 1746, after many protests, Richard abolishes the Monarchy. He instates a Republican government in Padres Del Fuego, being named "Lord Protector."

Note: Any islands not listed with a tax rate are islands that have no trade with Padres Del Fuego.

MFO (Member of the Fuegon Order): An order of Chivalry in the Commonwealth of Padres Del Fuego. People who receive this order must have contributed heavily to the island. The degree of the contribution will vary as to what class they are in. Recipiants who have contributed to other fields of the world that are significant may be given the title "Honourary" in addition to the normal title. The classes (from greatest to least contribution) are as follows:

Knight/Dame of the Order of the Fuegon Sovereignty (KFS/DFS) - Must have very outstanding contributions. Uses the title "Sir/Knight" (male) or "Madam" (female) before name.

Officer of the Order of the Fuegon Sovereignty (OFS) - Must have moderately outstanding contributions. Uses the title "Officer" (unisex) before name.

Member of the Order of the Fuegon Sovereignty (MFS) - Must have decent/smaller (but still outstanding) contributions. Uses the title "Gentleman" (male) or "Lady" (female) before name.

The Eyepatch: A Medal given out personally by Lord Protector Garland. This medal is given out to people who have made outstanding contributions to the island. There are three different types of the Eyepatch:

The Golden Eyepatch - A medal given to people who have contributed very heavily to the island. Owners are referred to as "Pirates of Indubitable Honour."

The Silver Eyepatch - A medal given to people who have contributed greatly to the island. Owners are referred to as "Pirates of Great Honour."

The Bronze Eyepatch - A medal given to people who have contributed somewhat to the island. Owners are referred to as "Pirates of Honour."

Any men who hold such a medal that are not pirates have "Honorary" added to the beginning of the title (Ex: Honorary Pirate of Indubitable Honour)

Holders of an MFO Title:

Jeremiah Garland (KFS) - For his outstanding political/diplomatic prowess and contributions to the political world (including Great Britain, Russia, and Padres Del Fuego itself).

Holders of an Eyepatch:

Christopher Crane (Golden) - For being the first to make Padres Del Fuego an independent sovereignty.

Relationship with the Caribbean Trade Union

On May 9, 1746, all relations with the CTU were severed, and the Commonwealth of Padres Del Fuego officially ceded from the union. There were two purposes for this action: 1) the Commonwealth's recently established policy of "splendid isolationism" and their growing conservative lack of interest in foreign organisations, and 2) growing tensions with the Imperial Republic of Raven's Cove, concerning trade disputes, growing tax rates, and territorial disputes. All alliances with Raven's Cove have since been cut and current diplomatic status with the Imperial Republic has been labelled as "unfriendly". 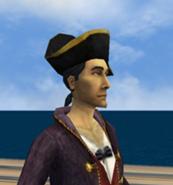 David McMartin, Governor of the Fuegon Dominion of Outcast Isle
Add a photo to this gallery

The island's volcano during daytime

One of the bars in Los Padres, Skull's Thunder, around dawn

The tailor shop on Los Padres around dawn

Retrieved from "https://gamersfanon.fandom.com/wiki/Commonwealth_of_Padres_Del_Fuego?oldid=740599"
Community content is available under CC-BY-SA unless otherwise noted.