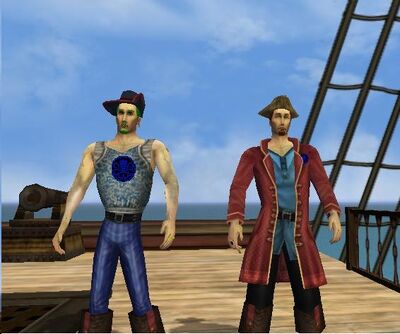 Captain Samuel Sharp, full name Samuel Magister Et Imperator Sharp, was born on Port Royal in 1713. He was born to a rich merchantman by the name of Sir. Henry Opulens Sharp. He had a sister named Anne Soror Sharp. At a young age, Samuel was very privileged. He visited the Governor of Port Royal regularly. He always wanted to be a captain, and was taught how to sail by his father. by age 13, Samuel could out manouver a pirate ship with ease. At age 16, he joined onto the Royal Expeditionary Navy. At that time, Lawrence Daggerpaine was the admiral of the navy. One night, Lawrence had to escape from the island fortress of Kingshead, with a young man and a body. That same night, Lawrence and Samuel left the royal navy. Samuel was out of a job and a disgrace to his family.

A New Job and Life

A few years later, Samuel was on the island of Tortuga, looking for any work. Lawrence Daggerpaine suddenly came upon the poor captain. Lawrence said he had become a pirate, a guildmaster of a very well made guild. He asked Samuel to join, which Samuel excepted quickly. Samuel sailed War Frigates for the Gen. Of Peace. Then, Lawrence commissioned Daggerpaine Industries to make a new ship for the guild: a giant ship of the line with the name G.O.P.S. Leviathan. Lawrence made Samuel captain of the awesome ship, and put the ship, with a special contract with John Breasly, in the service of the Royal Merchant Fleet. Samuel now had another respectful job, and a huge income. Years later, he died in battle with his arch enemy, Captain Mors.

Retrieved from "https://gamersfanon.fandom.com/wiki/Captain_Samuel_Sharp?oldid=757130"
Community content is available under CC-BY-SA unless otherwise noted.