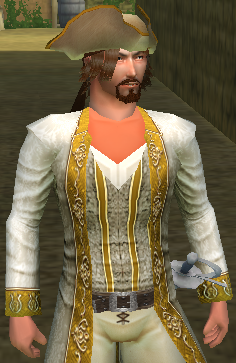 "Take 'em down before I take you down!"

"For Spain! And for whatever else we're fighting for..."

Born to Josh and Rose Yelloweagle, Jason was raised for a short part of his life in Port Royal. Sadly, his parents had been part of a conspiracy to overthrow the evil governor. When the conspiracy failed, his parents fled with the then 9 month old Jason. His parents fled to Vera Cruz, thankfully none of the residents asked about their past, and the Yelloweagles actually become good friends with most of the town, the nice part of it that is. Because his parents had brought their wealth from Port Royal, they were able to send Jason to a good school, and have him take fencing lessons. When Jason was thirteen, his parents finally told him of their past life. The next day when Jason went to fencing practice, his instructor noticed that Jason was now better then ever, so he set him up in a match against the best of the class, Tom Burliff. Tom was a third taller, and bigger than Jason, but this didn't bother him at all. When the match began, Tom made his move, a quick lunge for Jason's left side, for Jason was right handed. Quickly Jason blocked the lunge and hit Tom on the hand. The boys prepared for Jason to make the final blow, but Jason merely walked around Tom, as he prepared again. Tom calmed himself and began to look at Jason's stance, standing there holding his sword out with very little effort. Tom quickly made a swipe at Jason's exposed side. But suddenly, Jason's sword blocked the attack and hit Tom in the shoulder. Tom wheeled around as Jason moved behind him, and found himself staring at the point of Jason's sword pointing at his neck. Tom dropped his sword and held up his hands. Satisfied, Jason poked Tom in the chest with his sword and went back to the training dummies. When his parents asked him how his day was that night, Jason simply replied, "It was ok." His parents looked at each other, having been told by his fencing instructor that Jason had come great lengths in training in just a few hours. After a few more months Jason could even stand toe to toe with his instructor for a good 10 minutes. After his teacher announced that he had nothing more to teach him, Jason graduated.

Retrieved from "https://gamersfanon.fandom.com/wiki/Captain_Jason_Yelloweagle?oldid=754179"
Community content is available under CC-BY-SA unless otherwise noted.