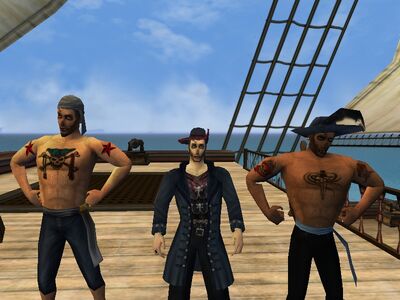 Captain Cruenta Mors Persoluta, Mors for short, is the most vile creature to sail the seven seas. He was born to Mary Misera Puella Persoluta and John Tristis Persoluta. While Mors was an infant, his father left him and Mors' mother. Mary became mentally ill because of it. At age 7, he killed animals for fun. At age 10, he started to learn dark magic. By age 13, he could curse people like a pro. When he was 15, his mother died. Mors had to make a life for himself.

Mors stole a light sloop when he was 16, and named it the Dark Magic. He sailed for 4 years on it, all the while practising his voodoo powers. Then, he heard tail that his father was drunk in a bar on Padres del Fuego. Mors quickly sailed there and confronted his father. He blamed his father for his mother's death. Mors' father struck him across the face. That made Mors go into a rage, and pulled out a staff he created himself, the De Percussore Staff. He aimed the staff at his father, and turned him into a pile of dust with one blast. Mors still hasn't gotten out of that rage. From that point on, Mors became the most cruel and ill tempered person or creature in the Caribbean. Even worse than Jolly Roger. He has become power hungry and evil.

He is a voodoo master, and can cast voodoo hexes that can kill a man with one touch. He is cruel and vile, and has one objective: To rule the seas, and the world. His ship, the Death Reaper, was a Death Omen controlled by Jolly Roger, but was captured by Mors. His crew is conjures made of sand using his Staff.

Mors's staff disintegrating.
Add a photo to this gallery
Retrieved from "https://gamersfanon.fandom.com/wiki/Captain_Cruenta_Mors_Persoluta?oldid=748838"
Community content is available under CC-BY-SA unless otherwise noted.