He ended the game in McRaging.

Captain A Ron usually ranks on Kingshead, at the group of 6 veterans. He has also been known to rank in the Governor's Garden on Port Royal, or by "running gators" on Cuba. His current single day record for enemies defeated 18,854.

Captain A Ron has fairly decent loot, currently with 5 legendary, about 25 famed, and around 30 brights. He has found many more however. He owns 3 Legendary Lost Sword of El Patrons, finding one of them from a level 18 navy veteran, and his most recent one about 24 hours after the one from the veteran! His other legendary is the Emerald Curse, and he also has Silver Freeze, which he found at sea one morning. He also has 2 Dark Mutineers, 3 Grand Blunderbusses, Master Crafted and Sacred Repeaters, Doom Rattler Hull Ripper, Assassins Throwing Knives, Seven Seas Dagger, and many more! His clothes are almost as good as his weapons, with 4 bright sack vest (2 were found within an hour of each other), and 3 bright jackets. Captain A Ron is well known for finding famed weapons from the group of 6 veterans on Kingshead, his finds there include 2 Grand Blunderbusses, Master Crafted Repeater, Lost Sword, and many others. 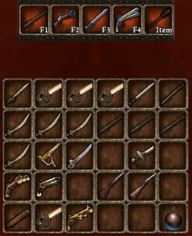 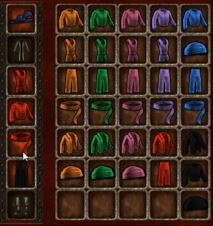 2012 Slay the Most Skeletons Competition

Captain A Ron was a major competitor in the 2012 Slay the Most Skeletons competition, being 1 of 4 people to get over 10,000 kills in the first day, and placing in the top 10 for 2 of the 3 days. He also placed top in his guild McRaging for 2 of the 3 days, and helped lead his guild to place 2nd in all 3 days. Captain A Ron ended up placing 12th overall for the competition, with 17,006 kills.

2013 Sink the Most Navy Competition

Captain A Ron participated in the Sink the Most Navy competition held 4/19/13 - 4/21/13, and came in 44th place, with 3,200 navy ships sunk. He participated with his guild McRaging, and a few friends, putting in around 50 hours total of sailing, cannoning, and repairing. He placed in the top 10 for two of the three days. 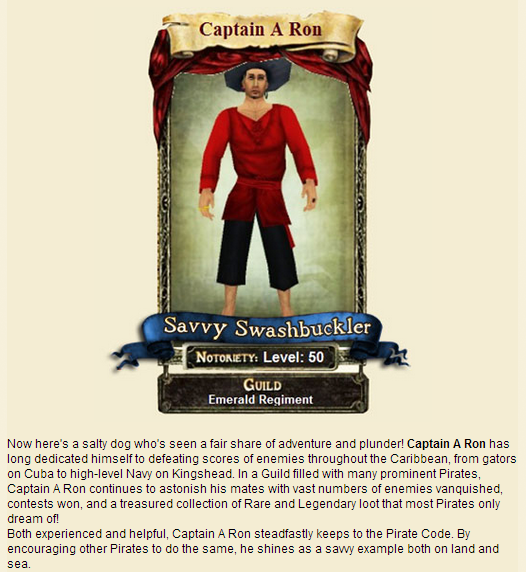 1 of 2
Add photo
Retrieved from "https://gamersfanon.fandom.com/wiki/Captain_A_Ron?oldid=748695"
Community content is available under CC-BY-SA unless otherwise noted.