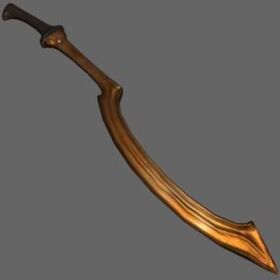 The Blade of Ra is a Legendary Khopesh, forged in Ancient Egypt.

The Blade of Ra is said to have been granted to the line of Pharaohs shortly before he ascended into the heavens.

When Alexander the Great conquered Egypt, the blade was then stored in his palace in Greece. After a few decades, raiders discovered it and stole it. The khopesh was spotted all over the world for several hundred years. It eventually found it's way onto an EITC cargo ship, captained by Ebon Slicin. When Ebon died, his many treasures were scattered.

It is a part of Ebon's Hoard.

The stats are as shows:

Retrieved from "https://gamersfanon.fandom.com/wiki/Blade_of_Ra?oldid=732450"
Community content is available under CC-BY-SA unless otherwise noted.