Basil Bridgebain has always been a pirate and always will be.

He is a true pirate a heart, and has defeated the most feared foes the Caribbean has to offer!

His favorite blade is Barracuda Blade, which is always handy to him, since it is BEAST. He aquired some nice legendary, Silver freeze and Lost Sword of El Patron. Many famed, and famed cursed.

Basil is scheduled to appear in The Goldvane Trilogy Book 2: A Captain's Journey

NOTE - The other pirate of Basil, Roger Squidfish, has already made an appearance in TGT.

More coming! Please dont edit UNLESS its grammer or spelling. 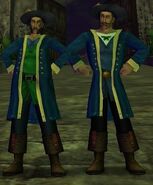 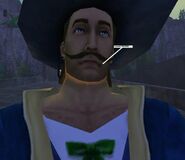 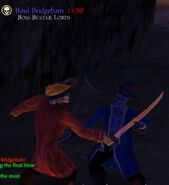 My epic sword of Thunder, Fire, and a black cursed trail

:P
Add a photo to this gallery
Retrieved from "https://gamersfanon.fandom.com/wiki/Basil_Bridgebain?oldid=703367"
Community content is available under CC-BY-SA unless otherwise noted.