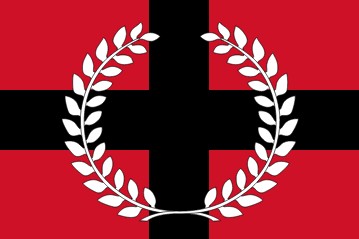 The Republic of Astendaven, or simply Astendaven, was a town under construction on the Civcraft server. It was led by Consul Cannonwalker, who founded the society on September 28, 2014. It's located at -2650X, 11109Z.

On September 27, Cannonwalker first logged onto the Civcraft server. Having been told by Funnyguy651 that there was a town he found, Cannonwalker traversed thousands of blocks of wilderness before reaching the ruins of an abandoned town. Although most of the town was destroyed to some extent, there remained a completely-untouched wheat field. Funnyguy and Cannonwalker harvested this wheat before going their separate ways.

Cannonwalker then travelled for thousands more blocks, being anything from jungle biome to frigid snow biome, before reaching an open plain area on top of a mountain. Cannonwalker decided this was a good place to begin his civilization. He built a small house, planted birch saplings he had and planted wheat seeds around a small pond.

After acquiring a few stacks of wood, cobblestone and bread, in the evening of September 29, AlReyesSpark had finally completed his journey to the civilization. With him, he brought potatoes, wheat, sugar cane, raw pork chops and even cacti. Later on in the day, Captain_Naughty completed his journey to the civilization, bringing with him charcoal, gold and other goods. He then set out to a nearby ravine in search of more ores. Dirty_Mallace would join the group a few days later.

However, after not too long a time, Captain_Naughty was slain by an enderman and spawned about 12,000 blocks away from Astendaven; this would lead him to temporarily quit the server. This, coupled with doubts from the other three members about the location, led them to abandon the town, taking with them the valuables and necessities it held. The unfinished town still stands for any passersby.

1 of 2
Add photo
Retrieved from "https://gamersfanon.fandom.com/wiki/Astendaven?oldid=715771"
Community content is available under CC-BY-SA unless otherwise noted.