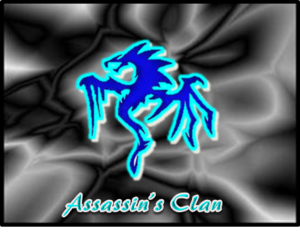 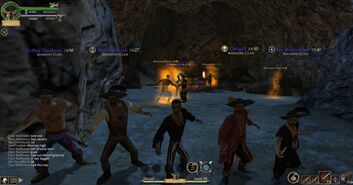 Some of the Assassins raiding 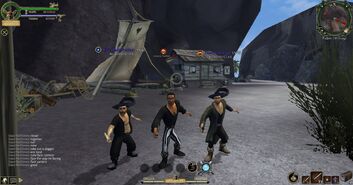 A few Assassins in the guild 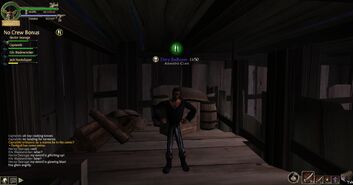 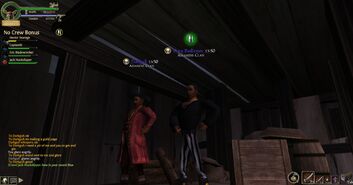 The guildmaster Gorge hookshot with a well trusted member, Darkgull 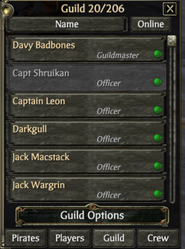 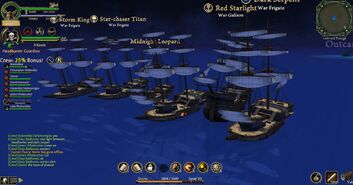 Some of the Assassin's Fleet.
Add a photo to this gallery

The Assasin's Clan is guild is only on the live game not on test. The Guild Master of the guild is George Hookshot . Assassin's Clan does SVS, PVP, Parties, Glitch Fests, and even wars! The guild is a medium size, but growing quickly. George keeps a reasonably tight ship, and he likes his men to follow his rules.

George is a level 32 member on POTCO. So, he has many Famed, and Rare weapons. He is always moving and doing something. George is normally in the Cursed Caverns on Tormenta. If you see him in the Gold Room your more then welcome to level-up or loot, but please do not interfere with his leveling-up or looting.

Good luck and try to find this infamous pirate.

The War Chest is where you can find data and pictures from all of our wars and battles. Click Here.

Born into the not Hookshot family on a secret island where he was raised, George had everything a young boy could ever want. Everything but... freedom. At this time he was forced to train in the arts of the sword by a master swordsmen for war. George's parents thought it was best for him, and they wanted him to take over their country. One day, George woke up to be kidnaped from his family. Taken by pirates who were hired to take him away; assassins. It was a mind racing trip for George, he had never been outside the walls of his parent's mansion.

When he arrived at the Caribbean, he found that the pirates gave him something- something his parents never did; freedom. George became a pirate. He had many adventures with the pirates and enjoyed their company. Eventually, he left his fellow pirates. The Caribbean was a hard place for him to survive. He was attacked several times by undead skeletons, some nearly killed him. He managed to kill the skeletons he faced with his gold crafted sword that his parents had gifted him. He discovered the weapon the skeletons were using- a dagger.

Five years passed. George still didnt settle down, but he did find someone who would teach him how to protect himself; the father George never had.

In a matter of two years,George had mastered the dagger, better then his master ever did. His master was very proud of him. He had now called him his son. One morning, he found his master dead-George was in tears. In his sadness George remembered a story his master told him when he was younger. "If anything ever happens to me, I want you to know that a I'm very proud of you. You were the son I always wanted, but never had. You see, when my wife was taken, I found our newborn son, who grew up to be a Navy Officer...." George then knew who killed his master. He set off on a mission, a mission to take all the lost, confused people into his arms. To train them to live a free life, to defend themselves or other people that might need it. To be true... Assassins.

The Clan Was Made

George was then off on his own in the Caribbean. He was on the shores of Cuba when he saw some torches- he then followed them. He found a few men, a group of about twenty. When he showed up in front of the fire, the men surrounded him. He showed that he was of no harm to them, and they gave him a drink. He then told the story of his master to them; they seemed to be very interested. George then thought of something," What if we all work together- a clan of assassins to stand by each other, at good times and bad times." They all agreed to his idea. Davy then picked a Right Hand Man- he picked Henry Calicomorgan, a loyal, fierce-hearted person.

They then set off to Port Royal, and invaded the Royal Caverns together. They were victorious. They were very proud of the success. They made their Assassins base on Raven's Cove, a place that no one thought that anyone would live off of. They thought it was perfect. Seeking out missions and recruiting clan members, they then had it set; a new clan... the Assassin's Clan!

The clan today is getting more members then ever. Many maxed level people are joining the guild and we are still recruiting. The guild population as of 9/29/11 is 153. Some great PvP and SvS people make up our clan/guild, making it strong against wars. We normally hang out at Isla Tormenta or Kingshead on Vachira, our guild server. On Abassa, we hang out at Tortuga, recruiting members. Kingshead and Raven's Cove on the Vachira server are our guild bases. If you want to join, or have any questions, then leave a comment below.

The Council of Assassins

In a time of war against the Elite Musket Men, George made a High Council; people who would make the choices about the wars, events, or just training. The members of the High Council are George Hookshot, Darkgull, Taylor, Capt Shruikan, Henry Calicomorgan, and Hector Pillageparr. They are all strong members of the clan, and they led the clan to victory to take control of Fort Charles from the Musket Men. Later that week of the victory, George signed an agreement between the Musket Men and the Assassins that gave control of Fort Charles to the Musket Men- and the Assassins got to keep control of Raven's Cove and gained control of Kingshead. This war took place on the Vachira server, and that is where both guild's home bases are located.

On the fourth of August 2011, George decided to re-rank the members of the clan, seeing new faces rising above others. He then appointed Henry Calicomorgan as the CO GM, Capt Shruikan as third in command, Taylor as fourth, Kevin Lester as fifth, and Darkgull as sixth.

Retrieved from "https://gamersfanon.fandom.com/wiki/Assassin_Clan_Guild?oldid=703294"
Community content is available under CC-BY-SA unless otherwise noted.