Please note:Area 5.1 is said to not exist

Area 5.1 is the secret British military base where the Non-nuclear Warhead is stored. The base is hidden by veils of magic and high-tech security and is the size of one server in Pirates of the Caribbean Online. In order to gain access, one must find the entrance which could be anything from a doorway in the Kings Arm to under a rock in Tormenta. After finding the entrance you must type in a code to override the Magma Lances and Boiler Cannons. Then you must cast a spell to stop the sudden flow of Demons, Warlocks, Djinni and Pain. 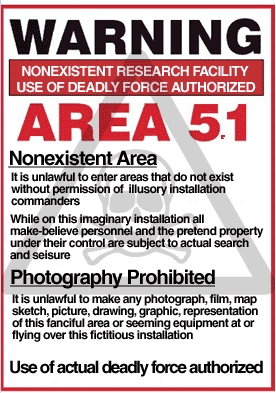 Are 5.1 is a top-secret British base that holds all secret projects of England.

People Permited into the Area

Area 5.1 is located in the Caribbean. It is its own server at the bottom of the list but has a hidden entrance that only several people know of. However, the server itself is unlike any other. There are armed guards and surveillance 24/7. There are also thermal scanners and voice recognition programs running through the trees. The reason that there is all this security is because Area 5.1 is a top-secret base and many enemy countries seek to destroy it. If any weapons inside of Area 5.1 should be found by Spain the world may be destroyed.

Area 5.1 is constructing ships by the thousands to send to the Kingdom of England. So far we have mad 300 ships.

Area 5.1 is constructing supplies, Russia will be given this supplies which consist of the following:

A gift to Russia

Retrieved from "https://gamersfanon.fandom.com/wiki/Area_5.1?oldid=754935"
Community content is available under CC-BY-SA unless otherwise noted.