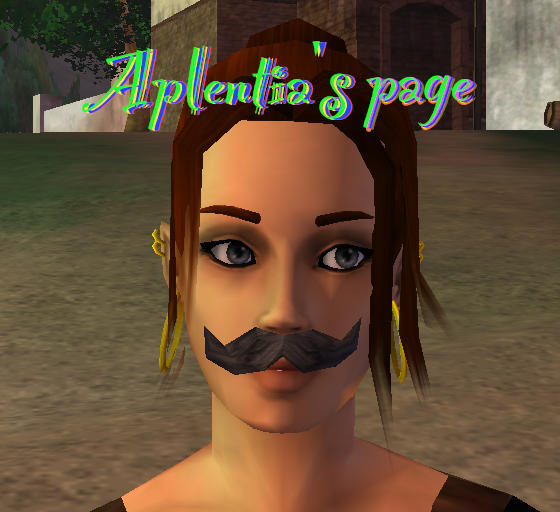 Am I in a good mood?

I am currently eating: three jars of

My personality on the outside is sweet! But on the inside.....Well....

I have the attention span of a squirrel

And last but certainly not least..... I LOVE BACON!

Everything I do is out of

My friends call me: Tia, Apple, Witch, Ipod, and She-devil!

What I like the most: Watching level 13's trying to defeat Foulberto Smasho, Invasions,

'What I hate the most: Loading before the game, INFERNO, Splitting the rep between players, fishing, potions quests, sailing quests, noobs who think there all that, noobs that get in my way, etc.

Favorite Music: Anything I can fit into my boom box! (bacon included)

Cherie (cher bear): My bestest best friend! She helps me through everything and anything! (Mess with her you get her wok!) Shes a truly rocking person! I will always love you (Like a gold fish) Sis! xD

Alyssa (al): Known her since I was level 23! One of my best friends and truly amazing!

Sam Revenge (Samchez): Nice and awesome Samchez will always make me laugh when times get bad! I love hanging out or just talking with you!

David Light: You'll always be my best friend, and be there to support me!

Roger Wildeagle (Rogie): Your very funny and make me laugh out loud! xD

Bill Plunderbones: A worthy opponent in battle, my frenemy and arch rival all in one! xD

I get lots of loot 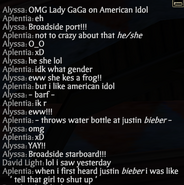 Me, Alyssa, and David discuss celebrities

Lake Wahoo in memory of wahoo :(
Add a photo to this gallery

1 of 3
Add photo
Retrieved from "https://gamersfanon.fandom.com/wiki/Aplentia?oldid=703261"
Community content is available under CC-BY-SA unless otherwise noted.