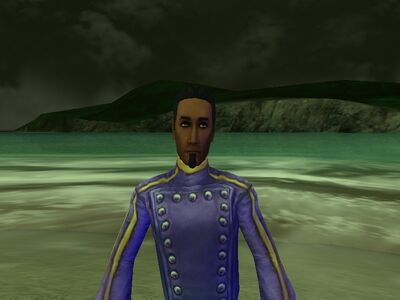 Matthew Omalley was born on August 17th 1701 in Limerick, Ireland. He was only an infant when he was introduced to piracy. His father was Matthew James O'malley, an Irish native and his mother, Duchess Grace Goldtimbers, soon-to-be Queen of France. When Matthew was fifteen (15), he saw his father die during the Seige of Kilomina. Matthew claimed that one day he would bring the EITC to their knees and rid the Caribbean of all EITC guilds.

He then grew up with his mother and grandfather Giovanni Jonathan Goldtimbers. Giovanni was the right hand man and Prime Minister to King George Augustus Breasly of Great Britain.

He built many guilds but he failed to ultimately destroy the EITC for good. He then went on to marry Grace Marie Wilde. Shortly after, in late 1740, Matthew became the Lord Diplomat of the English Colonies. He hated their continued use of the EITC after his rebellion failed against Lord Benjamin Mcmorgan. He served a term until he turned against the EITC and fought another rebellion war. He kept trying for years to destroy them but failed again.

In 1744 Matthew came down with bubonic plague after a long voyage from paris to the colonie of new york to deliver a speach as the french king. He fainted on stage. It was such a bad spill, he broke his neck in the process. They performed EXCRUSHIATING neck surgery that made matthew faint from pain. He was scared for life their was much trauma. But he made a full recovery and with the right treatment they cured the plague. He became stronger then ever.

Return to the game

From out of NOWHERE, he came and gained an army. He and Former Lord Marshall of EITC Samuel Harrington ( Samuel Redbeard ) with the Elite Co.Marines had organized a come back for Harrington. However, O'Malley left the guild and excommunicated from them.

5. Admrial of French and English Navies

Retrieved from "https://gamersfanon.fandom.com/wiki/Alessiano_Matthius_Louis_O%27Malley_Goldtimbers_IV?oldid=703198"
Community content is available under CC-BY-SA unless otherwise noted.