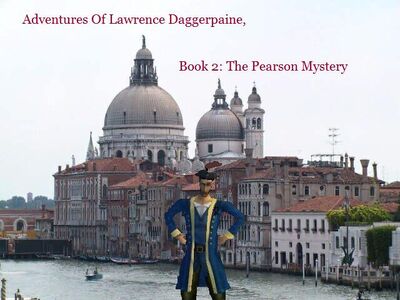 Footsteps echoed off the walls of the dark, deserted street in Port Royal. The wet coble stones made it hard to run, but the runner kept going. He jumped over a gate and ran down an alleyway. He got to a locked door, picked the lock with a small dagger, and got inside. Once in, he heard a guard coming down the hall, and hid in the shadows. He counted to four before he heard a muffled gasp and the dropping of a large body. He stepped out of the shadows, and saw the guard knocked out on the ground. "Good work Kat." he whispered into the shadows.

"Thanks Law." said a voice as a female figure stepped out of the shadow. It turned out to be Kat Walnutstone.

"Let's get going, we don't want to be late." Law whispered. They headed down a hall, ran down a staircase, and ended up on a balcony. In the large room below stood a number of persons. One, cloaked in a large robe, seemed to be the center of attention, talking ludly while everyone watched. In a chair, a man was bound and gaged. Law and Kat swang down to the floor using ropes which hung from the ceiling. They landed quietly behind two of the onlookers, without being noticed. They then knocked them out. That alerted the rest of the onlookers, who turned and attacked the pair. Kat kept at them, while Law went to the cloaked figure. Just before Law was upon the figure, the man in robes drew out a knife and was about to murder the man tied to the chair. Law knocked the knife out of the figure's hands quickly.

"Ah, Lawrence Daggerpaine, glad you could join us." said the figure. Law then used his sword to draw back the hood to reveal the man within.

"Ah, Pearson Wright. Always glad to make it." replied Law as he handcuffed the figure. Cad Bane then walked into the room.

"I thought I had told you to wait, Lawrence." he said.

"Well, if i had, you would have a body and a rumor." Law replied.

"Take Pearson out of my sight," Cad ordered his soldiers. The soldiers took Pearson roughly and pulled him outside, and to the jail.

"Oh look! Pearson is being hung tomorrow." said Bess Firebones as she opened a letter sent from Port Royal while on the Gen. Of Peace's private island, Peace Island.

"I would like to go, since it was the fist case if the Sauveurs Pirates Jeu." Kat said.

"Well sure, IF you're ok with seeing a person fall, then hanging lifeless by the end of a rope." replied Law.

"Fine, you can go. I've got better things to dp, like rebuild that lab...." Law said as he glared at Bill Plunderbones.

"Hey! I thought that was solic acid, not potassium." Bill defended. Right then, Edgar Wildrat came into the room.

"Law! Pearson wants one last request. to have a last visitor.... you." He said.

"Looks like I'm going after all." Law said as he put on his famous tricorne.

Law and the guild walked out of the fancy hotel the EITC (yes, they are pirates, but Law and Samuel Redbeard are friends) rented for them.

"I'm going to the jail. Anyone want to come with me?" Law asked.

"No, thanks. Bess and I are going to go shopping before the hanging." Kat replied.

"Ya, same. Lawless and I, along with the kids, are going on a hike." said Bounty Hunter Bill.

"Emerald and I are going to the beach." said Bill, taking Esmerelda's hand.

"Ok, I'll go alone then. Have fun guys." Law said as he started off for the jail. The jail was on the far side of the town, across the busy markets of Port Royal. Law had stopped at many venders peddling items. By the time he reached the jail, it was midday. The guards greeted him when he arrived.

"Hello, Lawrence. Seems like you've got a man in there that wants to seek audiance with the famous pirate sleuth who is responsible for his capture and soon to be execution." chuckled one of the guards.

"Well, if it's revenge he wants, he will have a hard time at finding it." Law replied tapping his sword that was aalways by his side. "And anyway, I'm not that famous." He then went inside the jail. It was dimly lit and muskey. In one cell, there was a burley man, muscular, and fully tattooed. Another was empty except for a skeleton. Finally, Law came upon the one that held Pearson. "I see you're enjoying your new lodgings."

"They are not as comfortable as you would think."

"I come with a warning. Soon, you will take a journey in which all rational thought will be eliminated. You and your guild will crumple, beggeing for mercey when this is over."

"LISTEN TO ME!!!," Perason hissed. "More will die, and you can't save them. You will die at the end if this journey, understand?"

"I understand you are a raving lunatic. Now i must go, you've got a date with the gallows, and I don't want you to miss it."

"Before you go, take this, for when you see this symbol, you'll know it was your doing." Pearson gave Law a piece of parchmant with a symbol on it. The symbol was a combra, coming out of the mouth of a skull and cross swords. Law stuffed the paper into his jacket pocket and left. Just outside, stood Samuel Redbeard, Cad Bane, a dozen soldiers, the Gen. Of Peace, a mess of EITC and Navy officers, a preacher, and pretty much every living soul on all the main islands if the Caribbean.

"Ok, you may take him, but preacher, you may go home, for I believe you are not needed here." said Law. The soldiers and officers went inside and got the condemned man. He was marched up the hill to Fort Charles. They pushed Pearson up onto the gallows, and made to stand in front of the noose. An offical called off the crimes which were comitted, and asked Pearson if he had any last words.

"Meet you on the other side Law." he said with a grin. A bag was then placed over his head, the noose around his neck. Just before the executiner opened the trapdoor, a blinding light made everyone's eyes close. No one could see a thing. Just as fast as it had appeared, it vanashed.

"What was that?" asked Bess.

"I have no idea, but I think it came from the watch tower." Law said as he pointed to the tallest tower of the fort.

"Well, whatever it was, it's gone now, so lets finish this hanging, shall we?" Said Samuel Rebeard. The executioner then opened the trapdoor, and Pearson fell through. It was over in less then 5 seconds. Soldiers then laid the body in a coffin and carried him to the cemetary.

"And that is the end of Pearson Wright." Law whispered to himself.

Back on Peace Island, Lawrence and the guild went back to their normal lives. Bill in his newly rebuilt lab, Kat with her voodoo dolls, Hunter with his training, and Lawrence doing whatever came to mind. Lawrence, as it happens decided to go to the beach of Peace Island. He looked on the horizen, and noticed a ship appoaching. He took out his spy glass and saw that Hawkeye was sailing the ship. When Hawk landedm Law greeted him.

"Hey, Law. We've got something for you...." Hawk then waved for his guild , Ensouled. They brought a coffin off the ship, and set it down on the beach.

"Hawk, this is no time for your crazy Powerthirst stuff. So, you thought we could help?"

"Ok, bring him into the base." Ensouled then carried the coffin into the base, with Law leading the way. As they walked, guild members noticed the possestion, and followed as well. Law then brought them to the lab. "BILL!!!! I have something for you!!!!"

"Ooh, a present!" Bill exclaimed. Law then repeated what Hawk has said. "Ok, lets crack open this case and see if our friend is inside." A couple Gen. Of PEace members brought a couple large iron sticks and pried open the coffin.

"Oi, that deffinatly looks like him" Said Law upon seeing the contents of the box.

"Yes, but there are some differences. See here, the shape of the noise is nothing like our friend's. Also notice that it looks like it was stiched together. Also, this doesn't feel like bone, more like metal. Yes, I believe this is not Pearson, but a very good taxadermy copy of him." Bill listed off the facts as if they were looking at a sculpture . "So he's not dead?" asked Law angryly.

"Lawrence! Forsome reaon, King George II wants you to go to Venice. I don't know why he would want you to go there, but here's his letter." He said as he handed Lawrence the letter.

"Ok, me and Kat will get on the next ship from Port Royal to Venice. The rest of you stay here in the Caribbean." Law said after he read the letter.

It was a week into their voyage across the Atlantic Ocean. All was peaceful. Law and Kat shared a room with the captain of their chartered vessel, Captain MacRoberts was his name. One day, Law went down to the cargo hold to look for his trunck, when he came cross something that looked like a makeshift labortory. There were chemicals all over the place, and an open wine bottle. Law noticed on the floor there was a dead rat. Problem was, there was nothing to show for the cause of death to the creature, so Law decied to investigate. He found that the inside of the mouth was all charred black, while the outside was like a notmal rat, like as if a fire had start inside the rat. He thought about telling the Captain this, but decided not to, for the Captain must know all about it. That night, he and Kat ate dinner with the Captain as they did every night.

"So, there I were, up to me breeches in mud, when I sees me first mate run out of their with now trousers on!!" said the Captain as he told one of his tales.

Retrieved from "https://gamersfanon.fandom.com/wiki/Adventures_Of_Lawrence_Daggerpaine,_Book_2:_The_Pearson_Mystery?oldid=206860"
Community content is available under CC-BY-SA unless otherwise noted.