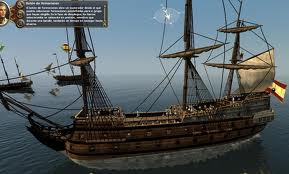 When Lawrence Daggerpaine and Bill Plunderbones made the advanced Ship of the Line, they had thought that was all the advanced they were going to make. They were wrong. After one of the plans was stolen by Captain Robert, who mysteriously died in an explosion on his vessel, the HMS Kronus, Daggerpaine Industries started to produce both Advanced War Brigs, the plans somehow falling into the hands of Lawrence from the EITCSI, and Advanced War Sloops, which were made by Simon Redskull. Lawrence then decied to remake the War Frigate and War Galleon Designs, to make the Advanced War Frigate and the Advanced War Galleon.

As of today, only Daggerpaine Industries builds the advanced frigates and galleons. The plans are kept in a top secret location only known to Law and Bill.

The Advanced War Galleon is a large galleon. It has 15 Cannons, both broadside and deck, on each side and 4 forward shooting cannons as well. It can hold 20 cargo, and get a speed of 20 knots when at full sail, crew, and cargo. It is 300 feet in length and weighs 6 tons.

Retrieved from "https://gamersfanon.fandom.com/wiki/Advanced_War_Galleon?oldid=745699"
Community content is available under CC-BY-SA unless otherwise noted.