This masterpiece is brought to you by: 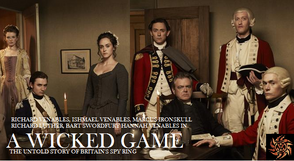 Commander Ishmael Venables - Commander of HMS Wolverine and son of Sir Richard, is recruited as a spy

Lady Hannah Bluefeather - Daugther of the British envoy to Spain, and love interest of Sir Richard 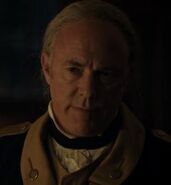 Prime Minister Johnny Goldtimbers
Add a photo to this gallery

Great Britain is in the seventh year of her bitter struggle with Imperial Spain. Carlos Clementine, hailed as the most brilliant european general since Julius Caesar, has established himself as dictator of Spain, he has the reputation of being invincible on land, but at sea it is a different matter....

Chapter I: The Dead of Night

The full moon had long set on the rolling Yorkshire moors when dense storm clouds blew in from the west, obscuring the stars. In the pitch darkness before dawn two riders walked their horses down a narrow, overgrown bridle path. The first of them carried a lantern. He was a burly countryman in a rough russet-coloured coat and battered old tricorn. The second wore a heavy cloak over the scarlett uniform of a General in the marines.

Both men where well armed. They had carbines in the holsters attached to their saddles and both wore a brace of pistols in their belts. The general's heavy sword was curved like a cavalry sabre rather then the customary straight blade. The countryman with the lantern had a double-barreled shotgun slung over his shoulder.

They stopped and listened, but all they could hear was the soft jingle from the metal bits as the horses tore grass from the ragged edge of the pathway. The general took a watch from his waistcoat and leaned forward to read the time by the soft glow of the lantern.

"Do you think he'll be there?" asked the countryman, a touch of anxiety affecting his voice.

The general nodded. "I'm sure of it, is everything prepared?"

"Just as you instructed"

Leaving his companion in the lane, the general urged his horse forward to a gap in the hedge which led into the wide courtyard of an abandoned Inn. A dimmed lantern hanging above its entrance cast a small circle of light onto the cobbles.

Despite the darkness, the general was familiar with the layout here. A row of stables was connected to the Innhouse, and a ramshackle barn completed the third side of the open square. The general doused his lantern, slid down from his horse and looped the reigns over the shaft of a massive old farm cart with a broken wheel. Much of its load of hay had spilt onto the cobbles. Then he stood very still in the darkness. He could feel the weather had changed; a sudden stronger breeze blew from the west and he could smell the rain coming.

"Did ye bring the money?" a low voice asked from the circle of light. Remaining in the darkness the general took a heavy leather pouch from the pocket of his cloak. Holding it at arms length he shook it. The Gold inside jingled, and instinctively he stepped away from the sound he'd made. The movement saved his life.

A Musket blasted out of the darkness to the left of the lanterns pool of light, the shot thudded into the butt of the carbine on his saddle. The horse reared in terror, and tearing the reigns free, it galloped blindly out of the yard. Two more shots sounded before a voice cried out, "Stop firing you fools! give me some bloody light!" A figure carrying a musket darted forward, reaching up to turn up the wick of the lantern over the doorway. From where the general now lay. flat out on the cobbled yard. he discharged his pistol at the man and rolled away to seek the cover of the broken carts, sagging edge.

Two more musket shots rang out! Five of them, the general calculated. Time to adjust the odds. Reaching up, he fired his second pistol into the straw spilling out of the wagon, and scrambled into the nearby barn.

The muzzle flash from his last shot caught the dry straw and lick of flame showed, then a sudden explosive brilliance - gunpowder mixed in with the straw had burst into a dazzling incandescence that illuminated the entire courtyard!

"Down on him!" Shouted the hidden leader, "before he had time to reload!" Silhouetted against the flames, three men approached carrying muskets fitted with bayonets, The general thrust his hands into a full corn bin next to the doorway and withdrew two large horse pistols that had been concealed in the grain. When his attackers where within seven paces of him, he fired. Grunting two of the mercenaries sprawled at his feet, but the third came on, lunging with the bayonet that glinted wickedly at his stomach. The general dodged and tossed aside his empty pistols and drew his sabre. With an upward sweep he parried the musket and swung the blade down to strike the attackers neck.

As the man fell, the blast of a shotgun was followed by another single pistol shot. After a brief pause, his companion called out, "all clear sir" The general cleaned his blade on the coat of one of the mercenaries and returned to the courtyard, where the flames of the burning straw were already dying down. The countryman turned up the lantern over the doorway and pointed with his shotgun toward the two other dead men. "both done for sir"

"Hardly my most elegant plan" Replied the general wryly. "but affective for all that"

As the general searched the mercenary corpse's, the accomplice commented, "good thing we came prepared!"

The general seemed to have found what he was looking for in the form of a small, black book with the crest of the East India Trading Company's board of director on the elegant cover. The general then consulted his watch again. "I've got to catch the mail coach to London. I must hurry. you'd better clean up here latter"

"I caught your horse" answered the countryman, "we'll make the rendezvous with time to spare"

General Sir Richard Venables looked up at the black sky. As he wearily hauled himself into the saddle, the first drops of rain began to fall.

Retrieved from "https://gamersfanon.fandom.com/wiki/A_Wicked_Game:_A_Venables_Ring_Novel?oldid=713722"
Community content is available under CC-BY-SA unless otherwise noted.