The original Pirate Code was commissioned by Morgan and Bartholomew, of The 2nd Brethren Court.

This Pirate Code was revised and commissioned by Ned Edgewalker. If a rule in the codex is broken by a lord 3 times, said person is evicted from the Court.

Pirate King: The Leader of all pirates. He (or she) makes, or approves ANY major decision in the Court. They can make war or peace. They are the Ultimate Pirate.
Current King: Richard Cannonwalker

Pirate Prince: The Second in command. They will inherit the Postition of Pirate King when the current king passes. They recieved the 2nd most votes in the Pirate King election. The future of the Caribbean is in their hands.
Current Pirate Prince: David McMartin

Keeper of the Code: This individual knows the Code inside out. If someone violates the 3 strikes you're out policy, they are the ultimate judge to make 1 of 3 choices. Choice 1 they can make, is to banish the person from the current court, but said person may try to gain entry again in a future court. Choice 2 is they can ban the person from every court making them ineligible, but they're bloodline, can try in future courts.. Choice 3 is the most brutal. They can choose to ban said person, and anyone with relation to said person from joining the court for eternity.
Current Keeper: Johnny Sea Slasher

The Map & The Lords 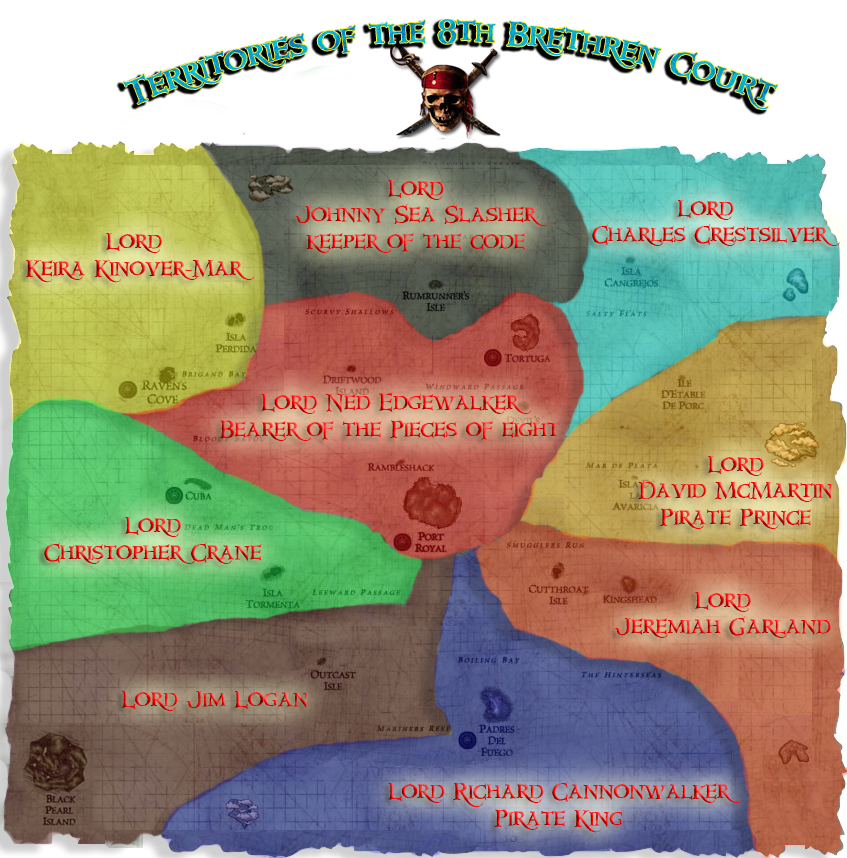 Lord Ned Edgewalker, Bearer of the Pieces of Eight

Lord Charles Crestsilver's Flag
Add a photo to this gallery

Im Ned Edgewalker, Lord of the Windward Passage. I have a italian heritage and was forced into slavery at a young age, forced to escape, I murdered the EITC guard and became a Pirate. Im honored to be in this court, as it is the 2nd court in a row ive been in. I hope to help the future of Pirates, and for the generations to grow. Tis Be a Pirates life for me. Savvy?

Hey, I am Pirate Lord Captain Jim Logan. I hope to assist the next generation into making POTCO and the Wiki into a much better place then it is now, or in the past. I have a lot of experience with the Brethen Court, being a Lord in my brother's court, and ally of the 5th Brethren Court and King of the 6th Brethren Court.

Ahoy! I am Richard Ulysses Cannonwalker, mighty pirate captain! I was born on November 21st, 1710 in London, England. My early days of piracy were along the Barbary Coast as a toilet scrubber on many ships and some coastal ports. I was eventually, however, captured and jailed in England.

After a while, I was taken out of England and jailed on a small, remote, Caribbean island known as Rambleshack. I met legendary pirate captain Jack Sparrow here, who helped me break out. On my way off the island, I met the fellow known as Jolly Roger, who had the mercy not to kill me like he did with Bo Beck ("but the sharks may not be so charitable").

From my escape on Rambleshack, i've had many adventures. I've collected various weapons and treasures spoken only of in legends, defeated many of the strongest foes that the Caribbean has offered, and somehow managed not to get myself killed along the entire way. I met many people and formed many relationships (some good, some bad). Now, i'm Pirate King of the 8th Brethren Court due to being offered a lordship in the court by Ned Edgewalker (and winning the vote, of course).

Gathered from the pages of an EITC Officer's Journal

The Sea Slasher has eluded me again, after stealing from one of Kingshead's vaults. The scoundrel seems to be shrouded in mystery, although my soldiers have been scouting for information.

Last month, they traced back his footsteps to a small remote cabin in the New Orleans Bayou. There was an elderly woman inside, in which we questioned severely. It didn't take long for her to divulge their connection. She stated that there was a boy who lived in the bayou years ago, alone, who matched our description of Sea Slasher. Before he left New Orleans, the old hag gave him a cursed hat, which is most likely the supernatural power that has allowed him to evade us for some time. We killed that voodooist swine, nobody else will know of our discovery.

I am Christopher Crane. Born in England to an English Lord and a freed slave, I was trained to use weapons at an early age. Due to a financial crisis in the family, my father resorted to raiding, a practice I aided him in along with my siblings. This eventually led to the deaths of my parents and me narrowly escaping along with my siblings. With that, we took to piracy, and as of right now I am the only surviving member of my family, having carried on my life with the power of cursed Aztec gold, making me immortal. I have worked up a reputation for myself, from a Spanish Lord exiled for failure to acquire a powerful sword, a popular mercenary, the leader of a grand military guild, a powerful voodoo practitioner, to the leader of a worldwide cult. A skilled assassin, resourceful leader, and fluent speaker, I will aid the Court in its goals.

Captain Jeremiah Garland was born in Calais, France, on October 4, 1698. His father was a British royal diplomat living with his wife in the French coastal town, and, like him, encouraged his son Jeremiah to enlist in the British Royal Navy. In 1714, Garland did so, enlisting as a lieutenant. After fighting in Spain, Morocco, and India, Garland's regiment was reassigned to the British West Indies in the Caribbean, to fight the growing issue of piracy that threatened the British trade monopoly, the East India Company. For years Garland, now declared a lord and named a high-ranking official of the East India Company, fought pirates throughout the Caribbean valiantly. However, after meeting and befriending a pirate captain by the name of Richard Cannonwalker (the current Pirate King) Garland soon realised the corruption in the East India Company and its defending forces, and proceeded to betray the crown in favour of a life of piracy. Whilst on duty in Fort Charles on Port Royal, he personally stole a massive collection of important British documents from the commandant's office, and made his escape aboard his flagship, The Dark Star. It wasn't before long that British bounty hunters and assassins began tracking Garland in order to recover the stolen documents. However, after assembling a rag-tag team of smugglers, renegades, and saboteurs, Garland and his crew became even more notorious throughout the Spanish Main for their continuing raids and loots on British colonies and ships, amassing a treasure estimated to be worth £4,500,000. As for the stolen documents, they were personally hidden by Garland, somewhere in the Caribbean, so only he knows the true secrets of the East India Company. On Garland's death warrant, he is wanted dead or alive by the British Crown on the following charges: "High treason to the Crown, espionage, various acts of piracy, arson, and pilfering documents belonging to His Majesty". The price on Garland's head currently sits at £80,000.

Today, Captain Garland can most likely be found on Padres Del Fuego, where he and his crew have their hideaway. He remains close friends with the Pirate King, Captain Richard Cannonwalker, as well as other Pirate Lords such as Christopher Crane and David McMartin. Recently, Garland has been involved in several plots to assassinate high-ranking officers of the East India Company and other British dignitaries in the Caribbean, including a massive explosion magazine he has supposedly planted under the Governor's Mansion in Port Royal. He was voted into the 8th Brethren Court on June 18, 1746, representing Smuggler's Run.

Hello there, my name is Charles James Crestsilver. I was born and raised in Paris, France. After my parents and I escaped to avoid the war, we were attacked by British ships (which missunderstood our French flag as a battling ship instead of a travel ship). We crashed on Driftwood Island and our ship was left there. After many more events (read Co. Sons of Liberty for the whole story), I founded Crestsilver's Army , came to inherit the Sword of the Crestsilver Lineage , and got my ship upgraded to an "Upgrade Vessel." My good friend Ned Edgewalker asked me to join the Brethren Court. I had always honored those pirates for not going after their own desires and discussing it out to make the best choices. I agreed and after many ups and dpwns, I'm back in. I may not be the traditional pirate, but don't underestimate my abilities and skill.

P.S. - I would like to thank Ned Edgewalker for taking the ocean where the island lies where my parents died and are buried. Please keep it safe and respect their memories.

Hello, my name is Jonathan Turner, King of the Barbary Coast. I was born on 1716 in Spain to a Scottish/British man and Spanish woman. After street violence in our town in Spain began to rise, we were forced to move to the Caribbean. I grew up as a privateer for Spain for several years working for my father. My mother died on Avaricia's island during an EITC raid, during that time, I was very young. My father, who was considered one of the best Spanish swordsmen in the Caribbean, taught me combat throughout my childhood. I mastered the skills of swordsmenship, marksmanship, and cannoneering at a young age. When I was 17, my father was murdered by an undead so-called mythical being by the name of "Jolly Roger". He also inflicted a curse on me before I escaped from him, giving me and incredibly brutal case of insomnia where he would appear in all of my dreams and terrorize me until either he, or I was dead. After my father's death, I found a large crew of people who were also cursed by Jolly Roger, but escaped from him. I led that crew comodeering The Golden Dragon. After recruiting hundreds of other mortals, we became an infamous armada of several vessels that would conquer a large part of the Caribbean during the Anglo-Spanish war and soon after that, we ventured to the Barbary Coast and ruled it. Although my main occupation is pirating, I'm also a very high-paid assassin. My best known killings were when I was a member of the INFERNO and OUTLAW guilds.

The court's headquarters is set up on the island of Padres Del Fuego in the village of Las Pulgas on a hilltop location, located next door to Nina's Tattoo Parlor. 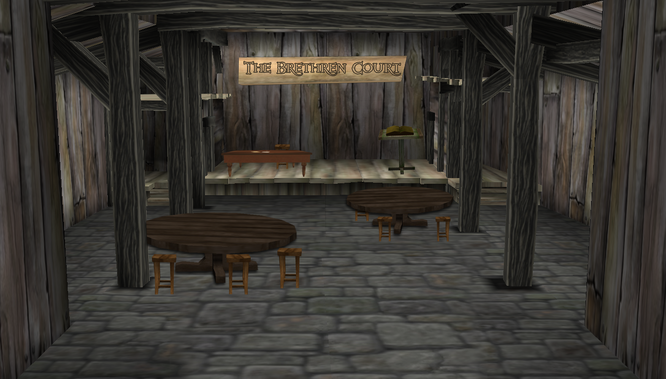 The interior is extensively large, featuring a stage, multiple tables for the lords to sit at, as well as a bar filled with the finest alcoholic beverages a pirate can "acquire". 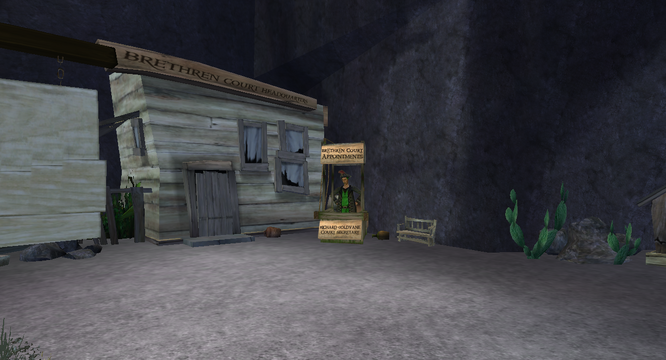 The headquarters is mainly used for meetings between the eight pirate lords, although it also welcomes in outside visitors for appointments and other meetings. Unless your meeting is of extreme importance, you must leave a reservation at the appointment booth outside the headquarters. 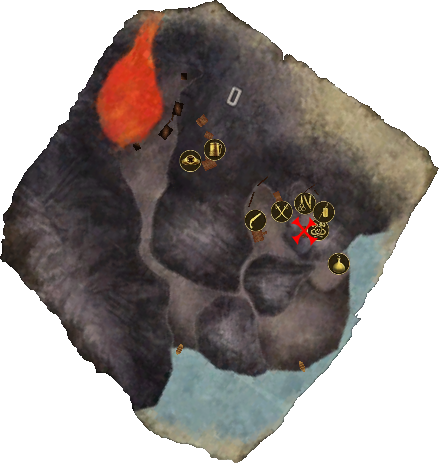 Retrieved from "https://gamersfanon.fandom.com/wiki/8th_Brethren_Court?oldid=679685"
Community content is available under CC-BY-SA unless otherwise noted.