"These are dark times, there is no denying. Our world has perhaps faced no greater threat than it does today. But I say this to all citizenry, we, hereby your servants, will continue to defend your liberty and repel all forces that seek to take it from you! Your EITC remains strong!" -- Lord Samuel Redbeard

Samuel Redbeard is a hardened and very elite EITC Lord.thumb|270px|right|Samuel in true form with the Staff of Armadyl.

He is the leader of the EITC and intends to stay that way for many years to come. His first EITC guild was "The EITC's Elite", and then the "Black Mercenary's". After that, he created the "United Trading Co.", and then the "Black Officers", and that remains his guild today. He has granted a full pardon to all those loyal to him. He is a Founding Father of the Player Made EITC. The others being Giratina Origin Forme, Lord Davy Menace, Ben Costello, Pablo Swordmaster, and Nathaniel Scurvyskull. He is the founder, owner, and leader of the EITC Council of the Elders. He became the First in Command of The Co. Empire, and he led it with a force. He was inducted into the EITC by Captain Ellison Shaw, and now is extremely high up in command of the EITC. He is RIGHT under Lord Beckett as far as rank and leadership goes. He is currently Level 50, and very skilled in all skills. he currently heads the East India Trading Company and the British Royal Navy.

Samuel Harrington was born on the island now known as Raven's Cove (he was born on it when it was still known as Emerald Isle) to Jolly Roger and Tia Dalma. He was raised on Raven's Cove, and led a happy and simple life. That's when his life would change forever. El Patron came on his ship, and took many people for his crew. Samuel Redbeard was one of those people. He served El Patron with pride and honor, until he decided to leave for another pirate crew. he sailed with many feared pirates, and eventually changes his name to Redbeard, as that was more pirate like. One day, while readying the cannons for a raid against Fort Kingshead, a massive Ship of the Line came and attacked thie ship he was on. It was the HMS Victoria, the flagship for the EITC at the time. It killed most of Samuel's Crew, and sunk the ship. Samuel then boarded the Victoria and demanded to speak with the head of the ship. Two EITC Officers took Samuel into the ships cabin. And there, sitting at a desk, was none other than Lord Cutler Beckett. They discussed terms, and soon came to an agreement. Samuel swore his loyalty to Beckett and to the East India Trading Company, and soon joined them. Becketts first order of business for Samuel was to kill the remaining survivors from the pirate ship. Samuel did this with ease and without regret, and he knew this was his lifes calling.

As of today, Samuel Redbeard is the GuildMaster of the Black Officers, and the leader of the EITC, and the EITC Black Guard. He can often be found hanging around El Lord Giratina Origin Forme, or Lord Johnny Goldtimbers, or around his wife, Maggie Wildrage. As of today, he has unknown children. He has teamed up with many of his "old day" EITC buddies such as, Pablo Swordmaster, Usman, and James Macstealer. Samuel heads a guild called Black Officers, and is the current leader of the EITC. He is friends with many of the other great leaders of the game, including John Breasly (his nephew), Jack Swordmenace, Richard Goldvane, and Francis Bluehawk. Samuel is currently in possession of the Staff of Armadyl and the Stone of Jas, making him a near god-like model. Do not test him, he will kill you, given the chance. Samuel is currently spending the weekdays in Japan learning the ways of the warrior, and learning to become a Samurai. He has made wonderful progress, and this new knowledge of fighting only greater increases his powers. Samuel has been studying up on Chaos Magick, which is some of the strongest magic out there, to increase his magical knowledge. He has been writing chapters in the Krokonomicon with John Breasly, which is currently in Samuel's possession, as he learns. He has recently befriended his former Third in Command, Lord Davy Menace. With BOTH his mother and his father being very learned in the arts of Voodoo, Samuel himself is a very powerful Voodoo Priest and Necromancer, as well as being highly trained in the other arts of magic.

Samuel and the EITC

The East India Trading Company. This name made famous by many men. And one of those men is Lord Samuel Redbeard. Inducted into the EITC by Beckett himself, atfer some harsh tasks, Samuel is loyal to the EITC, and to Beckett. he carries out all his taskes with ease and speed, and he does it flawlessly. He is the current and active leader of the EITC, and has taken up the title of Lord Marshal, or, First in Command. Samuel's first EITC guild was known as The EITC Elites, which was ruled by Pablo Swordmaster. After pablo was banned, Samuel stepped up to take his position as leader of the EITC, and so everybody followed him. Samuel ruled with an iron fist, and everybody knew who he was, and none of them dared to cross his path. He then had the guild "Black Mercenary's" created, along with "Black Mercenary 2". These two guilds made up the largest EITC army in history. Over 1500 men served in it, under Lord Samuel Redbeard. he still rules today, just not as stirct as he used to. Samuel has also created the "Elite Black Force", which contains many EITC guilds, because there are so many of them. Samuel has currently reached lordship. It is unknown how or when, but rumors say the story is a very thrilling one. Recently, Samuel recieved the Medal of Honor for his outstanding duties during the Great War. Samuel has earned many badges, including: all of the Navy badges, the Medal of Honor, the Outstanding Leadership badge, and many more. He displays them proudly upon his coat. Many more have taken Samuel's side this time around than last time. He has made major updates to the ranking system and has had certain guilds made to help aid him in this war. He has also finally put the Ministry of the EITC into action, and a majority of the departments are currently being used. Samuel is currently recruiting heavily for his guild and others to better himself in the war. The empire samuel has has now be named the "Grand Empire", and its guilds are: "Black Officers" (main), "Co. Republic", "Viceroyalty Co.", "Skulls Marines", "Marauders Militia", "Grande Doubloons", "Thirsty Souls", and "R.A.D ALERT", and "Gen. of Peace."

Samuel is a fierce fighter. He takes after his father when using magic to fight. Sometimes he uses Voodoo and/or magic, sometimes he uses his weapons. Here is a list of spells he uses:

Flare -- hits everybody nearby with fire

Vengeance -- lasts 8 seconds when he dies; hits everybody for 275 damage every second for as long as you are in it. Cannot be avoided unless outside of radius

Rage -- Samuel is invincible for 120 seconds 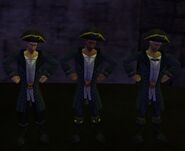 Samuel and his EITC Officers

Samuel blew out his back 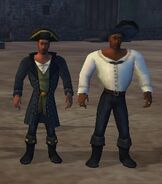 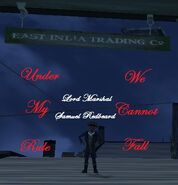 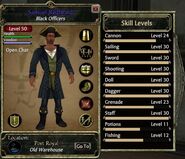 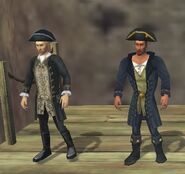 Samuel and Remington the Vicious

Commandant ~ Head of the Department of Spies and Assassins -- Taylor

Lieutenant General ~ Head of the Department of Security -- John Warsmythe

Spells Made by Samuel

Magicus Archanus (Can only be used by Samuel)

Mirra Din Naamus (Must be learned from Samuel)

Annoch Nar Hin Dei (Must be learned from Samuel)

"Una Nos Increbresco Obvius Sapentia Nos Fides!" (Latin) -- "Together we prevail, in the wisdoms we trust."

"Yesterday was history, tomorrow is a mystery, but today is a gift. That is why it is called Present."

"We are the EITC. Under my rule we cannot fall, under God we cannot die."

"I am the EITC. I am the strength behind it, and the leader in front of it."

"As you drift away in darkness, my face will be the last you see...."

"Did you actually believe, or were you truely niave enough to think that you could defeat me?"

"And now I'll take my leave of this wretched place."

"You again! No matter, I now have everything I need to finish what I started, but I can't have you disrupting me. ***Assassins Name***, get rid of this pest once and for all!"

"Stand aside fool, you cannot hope to stop me!"

"The East India Trading Company has a need for your services."

"I have a lesser feeling of likness toward you."

Samuel is rarely seen out of his EITC uniform

Samuel loves to wear his ruby ring, which is the Philosopher's Stone.

Samuel recently traveled to Singapore under the alius Ian Moone, which is an anagram of "I am no one."

Samuel is in charge of many organizations such as, the EITC, the EITC Council of the Elders, the Dagon'Hai Order, the Order of the Fang, the Elite Black Force, the Ministry of the EITC, and many more.

Samuel has The Krokonomicon, the Stone of Jas, and the Staff of Armadyl in his possession, making him a "Mage of incomprehensible power!"

Samuel has been called "Señor de Muerte," or Lord of Death.

Retrieved from "https://gamersfanon.fandom.com/wiki/Right_Honourable_Lord_Marshal_Samuel_Harrington_of_the_East_India_Trading_Company?oldid=76335"
Community content is available under CC-BY-SA unless otherwise noted.